New Delhi: A post by Jawaharlal Nehru University (JNU) student Sharjeel Imam is going viral after the India-Pakistan T20 World Cup clash. This post is dated 19th June 2017. In it, Sharjeel said that when there were no social media, his community used to celebrate Pakistan's victory at home and with neighbours. In a viral post, Sharjeel had said, "Many of our youngsters on social media are celebrating Pakistan's victory in cricket. Earlier, there were no social media, so they used to celebrate at home and in the streets. I have joined them many times as a child. However, for 12 years, I have neither seen cricket nor celebrated.'' 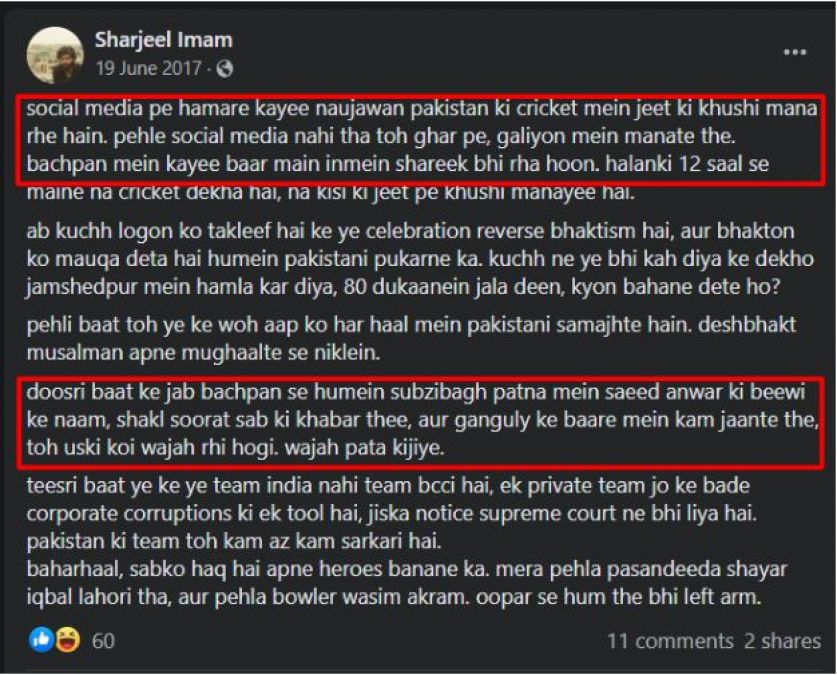 JNU student further wrote, "Now some people have a problem that it is contrary to devotion and gives an opportunity to devotees to call us Pakistanis.'' Some even said, "Look, you attacked Jamshedpur, burned 80 shops, why do you give excuses?" Firstly, they consider you to be a Pakistani in every way, patriotic Muslims should leave their momedianism. Sharjeel then said, "Secondly, when we were aware of the name of Saeed Anwar's wife, Shakhar Surat, in Sabzibagh Patna since childhood, and knew little about Ganguly, there must have been some reason for that. Find out the reason.''

Sharjeel is further saying in his post, 'This team is not India but team BCCI. A private team is a tool of big corporate corruption, which has also been noticed by the Supreme Court. The Pakistan team is, at least, official. However, everyone has the right to make their own heroes and my first favourite was Iqbal Lahori and the first bowler was Wasim Akram. From the top, we were also left arm.' Shrajeel Imam has been writing articles for left-wing portals like The Wire, The Quint and First Post. He had made provocative statements for the riots in Jamia Nagar. He was later arrested by the police from Bihar on January 28, 2020. A video of Sharjeel talking about Assam being cut off from India and made a separate country had also gone viral.