Today, the Prime Minister of the country, Narendra Modi, is celebrating his 71st birthday. In such a situation, he is getting birthday wishes from all sides. Leaders, ministers, MLAs, celebs are all wishing PM Modi a happy birthday. Madhya Pradesh Chief Minister Shivraj Singh Chouhan, Governor Mangubhai Patel, BJP State President Vishnu Dutt Sharma are also on the same list. All of them wished PM Modi a healthy long life on his birthday.

You can see Madhya Pradesh Chief Minister Shivraj Singh Chouhan extending his heartiest greetings to Prime Minister Narendra Modi on his birthday and said, "Prime Minister Modi is the Man of Ideas. He has enhanced India's dignity all over the world. The way he worked on the principle of minimal damage by combating the corona epidemic gives evidence of his able leadership. He explored ways to solve the problems of the nation which has been pending for decades. The citizens of the country have also accepted him as an unprecedented leadership Prime Minister. Today, the nation is moving towards development in every field.''

On the other hand, Governor Mangubhai Patel wished PM Modi and said, "All of us countrymen are proud to see Prime Minister Modi as a mass of light energy like the sun on the world horizon. Under his leadership, the country is moving fast with Sabka Saath, Sabka Vikas, Sabka Vishwas. With the new education policy, the work of making the country a superpower of knowledge is going on at full speed. A self-reliant strong India has become the resolve of every countryman.''

At the same time, BJP President Vishnu Dutt Sharma wished him on his birthday and said, "On the path of duty to make India a world Guru, the faith of crores of Indians is a centre of pride, dedicated to the progress of the poor, the underprivileged, the exploited, and extends warm greetings and best wishes to successful Prime Minister Narendra Modi on his birthday.'' 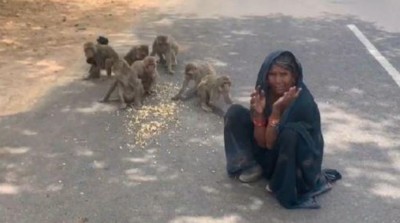