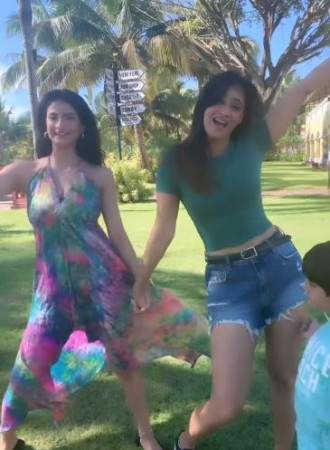 TV actress Shweta Tiwari celebrated her 41st birthday some time ago. However, it is difficult to predict her age by looking at her. The actress has also done many TV shows and many films in her career that you must have seen. The actress has been a part of the discussions from her professional to personal life. Shweta has two children after a total of two marriages and both live with her.

Shweta loves both of them very much. Her eldest daughter Palak Tiwari is 21, though it is another matter that no one can say that she has a 21-year-old daughter after seeing Shweta. On social media, Palak and Shweta are called sisters. Now the two have recently shared a great video of themselves and now the video is going viral on social media. In fact, October 4 was Shweta Tiwari's birthday and just four days after that, on October 8, her daughter Palak Tiwari's birthday. The two have reached Goa where they had a lot of fun and this is where the video of them has surfaced which you can see here.

In this viral video, Shweta is wearing a green top and blue denim shorts and her daughter carries a colourful halter neck maxi dress. Both of them are seen dancing in a very fun manner. You can see many celebs reacting after watching this video. The list ranges from Sangeeta Bijlani to Srishti Rode.

Piyush Gurbhele and Rupesh Soni become 'Dance Deewane 3' winners, get this much money with...

Karan was already in love with this co-star of the show, making splash in Bigg Boss