New Delhi: Kolkata Knight Riders (KKR) defeated Royal Challengers Bangalore (RCB) by 9 wickets in the second leg of the Indian Premier League (IPL-2021) on Monday. For KKR, Venkatesh Iyer scored a smoky 41 off 27 balls to help beat RCB. Iyer hit 7 fours and a six in his innings. His strike rate was more than 150. This was Venkatesh's first match in IPL. let us tell you that he play Ranji from Madhya Pradesh. 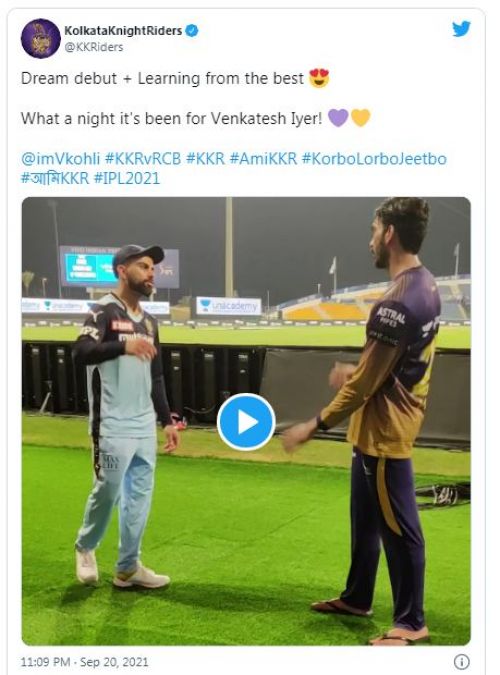 After the match, RCB captain Kohli gave Iyer tips on playing a pull shot. KKR posted a video on social media. Venkatesh is seen approaching Kohli and asking questions about the pull shot. After which Kohli gave him tips. Users on social media have been praising Kohli's generosity. In this match, RCB won the toss and elected to bat first. Batting first, RCB managed to score only 92 runs. Kolkata had an easy target of 93 runs, which the team achieved by losing just one wicket in the first 10 overs.

In the team's victory, Shubman Gill scored 48 off 34 balls and Venkatesh Iyer, who was playing his first match of the IPL, scored an unbeaten 41 off 27 balls. This was KKR's biggest win against Bengaluru in the chase. Earlier, KKR had beaten Bengaluru by 9 wickets (in 17.3 overs) chasing a target of 171 runs in 2011. Kolkata managed to win the match in just 10 overs today.

Kareena Kapoor celebrated her birthday with family, this is the best picture that has surfaced