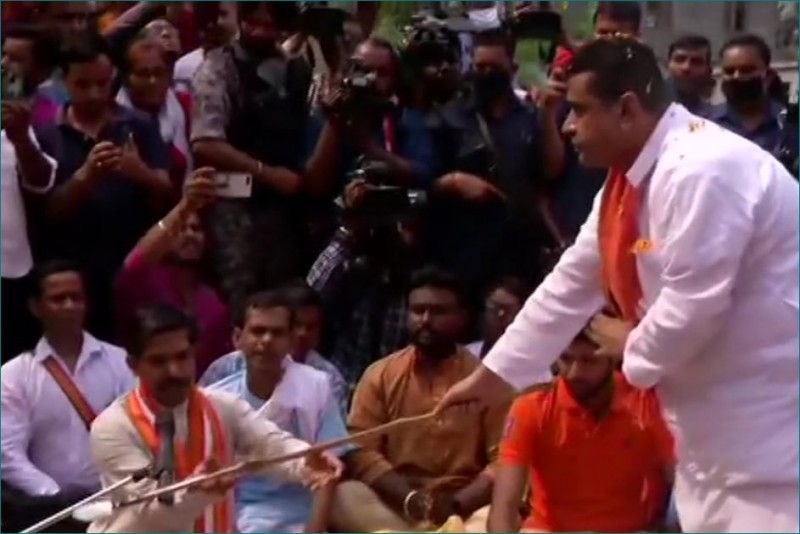 Kolkata: Suvendu Adhikari from Nandigram is going to fill the form as a BJP candidate in a short time. According to the information, Suvendu left the house for the SDO office in Haldia for this reason. Union ministers Smriti Irani, Babul Supriyo, and Dharmendra Pradhan will be present during the nomination with Suvendu Adhikari. Today, BJP's Suvendu is also going to do a roadshow with the Union ministers. You must know that he is competing with TMC supremo Mamata Banerjee from the Nandigram seat.

CM Mamata Banerjee has already filed her nomination from Nandigram, but she was injured during public relations after filing her nomination. Currently, she is admitted to the hospital. However, today the Trinamool Congress is about to take out a silent procession over the alleged attack on them. Suvendu Adhikari has left home to file nomination. Today the Union Minister is going to be present with him. After leaving the house, Suvendu first paid tribute to the martyrs of Nandigram and then he reaches the Singhwahini temple.

He worshiped at the Singhwahini temple and after leaving the temple he interacted with the common people. Then finally, he reached the Janakinath temple located in Nandigram market and there he worshiped Ram-Sita and Hanuman Ji. Meanwhile, talking to media persons, he said, 'My relationship with you people is very old. Mamata Banerjee only comes after five years during the elections. People will surely defeat them. I will file nomination papers today and I myself a voter of Nandigram.'