Like the men's cricket team, people are also giving attention to the women's cricket team. Now people also like to watch the matches of women's cricket team. These days the Women's Cricket World Cup is still going on. Indian cricket women's team was playing well in this but after facing defeat from South Africa, the Indian team has been out of the World Cup. People are very sad after this defeat of Indian team. At the same time, actress Anushka Sharma has encouraged the team by sharing the post.

Anushka shared the post in Insta Story, in which she wrote- 'The result has not come as we wanted. Our hearts are definitely broken but you all fought a tremendous fight till the end. Our support and trust will remain in you. Not only this, Anushka has created an emoji with the flag of India and a blue heart. Fans are also liking and commenting a lot on this post. 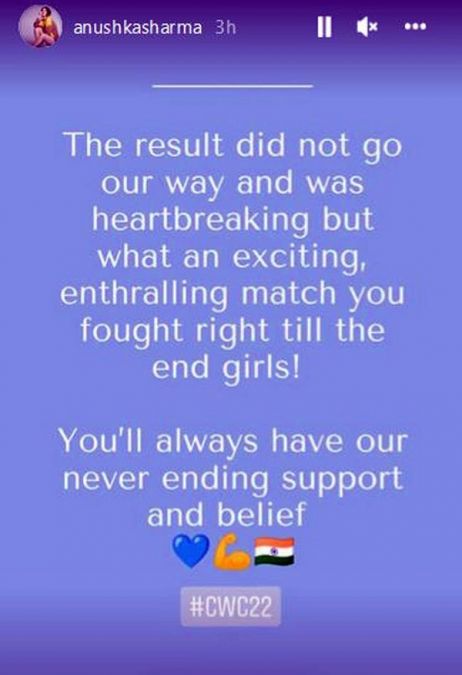 Talking about the work front, Anushka will soon be seen in the biopic of cricketer Jhulan Goswami. The name of this movie is 'Chakda Express'. The actress is working very hard for this movie. Jhulan is the woman player who holds the record for taking most wickets. Fans are eagerly waiting for this film of Anushka.

Taapsee Pannu arrives in Bikaner for a holiday with sister, photos go viral