New Delhi: Hindu religion has been the target of the leftists who consider religion as opium because no matter how much poison you spew towards Hindu religion, there is no provision for punishment of 'separation from the head'. That's why leftists keep insulting the Hindu religion every day to please a section. In this sequence, one name is also of the alleged journalist Arfa Khanum Sherwani of the propaganda portal The Wire, who has once again made a brazen attempt to show the deity, Lord Krishna of Hindus, as anti-Dalit, while displaying his lowly mentality.

A cartoon worth thousand words pic.twitter.com/qWUURGIraQ

Arfa has shared a controversial cartoon of Lord Sri Krishna on Twitter, in which he is seen hanging the Dalit boy on an upside-down tree. In the controversial cartoon shared by Arfa on Twitter, Lord Krishna is standing with a sword and tied the leg of a boy reading the book in front of him and hanging him upside down from the tree. The cartoon reads, 'You are the same Dalit who is putting the lives of ABVP children at risk by studying PhD?' The cartoon is made referring to the University of Hyderabad. The cartoon also reads, "How Hyderabad university reacts to VIP complaints.'' Arfa is getting to see people's anger on social media after seeing this controversial tweet. Social media users have demanded the UP police arrest Arfa. 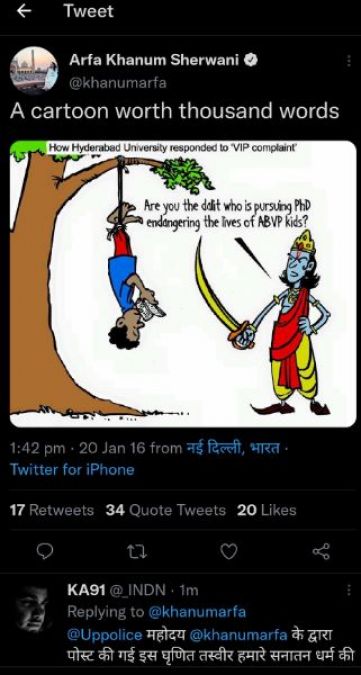 Arfa's mind is full of hatred towards Hindus and on a coming day, she also keeps on performing it poorly. This face of Arfa has come to the fore in the Tanishq jewellery controversy. Arfa had said, "How can those who kill the girl in the womb of the mother, burn her alive in the name of dowry, who are unable to see the girl's 'right' place beyond the kitchen and bed, give love and respect to the Hindu daughter-in-law in a Muslim house and her identity can also be preserved." These are the enemies of girls, of their freedom. Along with this, she had also tried to give a Hindu-Muslim colour to the Aryan Khan drugs case.