Turkey: According to Turkish President Recep Tayyip Erdogan, Turkey and Serbia have agreed to bring together leaders of Bosnians, Croats, and Serbs in order to resolve the problem in Bosnia and Herzegovina.

"Let's get three Bosnians, Croats, and Serbs together and execute this. This is the decision we've made. This meeting might take place in Belgrade or Istanbul "Erdogan made the remarks following a meeting with his Serbian counterpart Aleksandar Vucic in Ankara on Tuesday.

"We want to bring the leaders of this tripartite group together after the elections in Serbia and hold a meeting where we can take steps to ensure the territorial integrity of Bosnia and Herzegovina," Erdogan said in a joint press conference with Vucic at the Turkish presidency, according to state media report..

We "strongly and decisively" confirmed their commitment to the Balkans' peace and stability, Erdogan said, adding that "Serbia's support for Bosnia and Herzegovina's sovereignty and territorial integrity is very vital for the peace and stability of our area." Erdogan elaborated on bilateral relations between Turkey and Serbia, stating that the two nations' trade expanded by 34 percent to USD2 billion in 2021, with a goal of reaching USD5 billion. 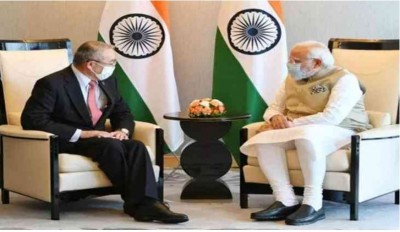