Allu Arjun and Rashmika Mandana's movie Pushpa The Rise (Pushpa The rise) is making a splash at the box office. This movie has recorded many records. Pushpa The Rise, the first part of the movie, was loved by the audience and now fans are eagerly waiting for the next part.  The dialogues and songs of the movie are busy recreated a lot. But now Pushpa's srivalli's performanceseems to have faded as social media sensation Urfi Javed (Urfi Javed) is also seen as Srivalli spreading her hussan.

According to media reports, Urfi Javed has shared a reel on Srivalli wearing a pink sexy blouse and saree. Of course, if Pushpa notices this srivalli, she will lose her heart. Jerking her hair, Urfi Javed shared her beautiful c-video with fans. Urfi Bala looks beautiful in a pink floral saree. Their nails, curly hair are making people crazy. And perhaps that's why these days there are only a lot of things going on on social media. Fans get crazy when they see The Katilana looks of Urfi Javed who robs Mehfil wearing a saree.

The over the top has been going on since Bigg Boss OTT (Bigg Boss OTT), urfi Javed's fate, yes, Urfi has also become the favourite poser of Paraji since he left the OTT. The audience loves to see their colorful style. Urfi's growing popularity has been steadily increasing the numbers of his fans. Fans remain excited to hear every news related to urfi. In such a situation, these new videos of them are no less than a gift to their fans. 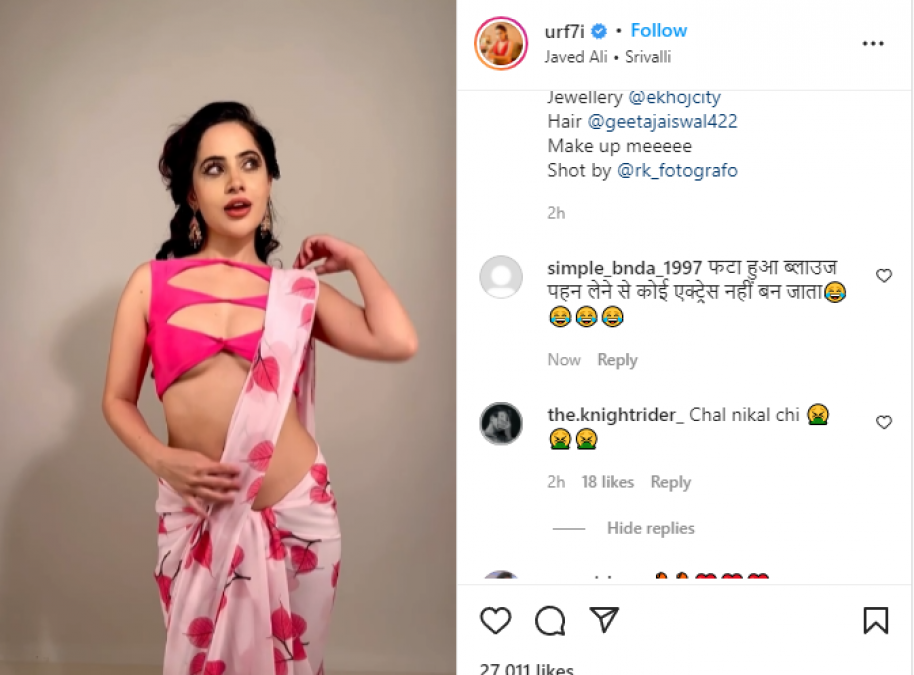