US: Intruder at Peruvian Embassy in DC shot dead by Secret Service WASHINGTON: The Secret Service officials shot and killed an accused "intruder" at the Peruvian Embassy in Washington, D.C, according to the statement by the police.

On Wednesday evening, Metropolitan Police Chief Robert Contee told reporters that the suspect was found smashing windows of the Peruvian Ambassador's residence in the Forest Hills neighbourhood of northwest D.C. The ambassador's relatives were inside and phoned the police shortly after 8 a.m., as per reports.  The suspect, a man in his late twenties or early thirties, was believed to be armed with a metal spike and was shot after a confrontation with uniformed officers.

Secret Service officials attempted to use non-lethal tasers on the man at first, according to Contee, but "those weapons appear to have no effect on the subject."  Officers then shot the man, who was pronounced dead on the spot, according to the police chief. Injuries to two cops are being assessed.

"I can't recall the last time we had an incident like this on one of our Ambassadors' homes or residence," Contee added. On Twitter, the Peruvian Embassy verified the incident, saying that someone entered the apartment without permission and caused property damage.

The Ambassador, his family, the residential staff, and the secret service operatives are all safe, according to the mission. The Secret Service protects foreign diplomatic missions located within the territory of the US capital and the state of Maryland. 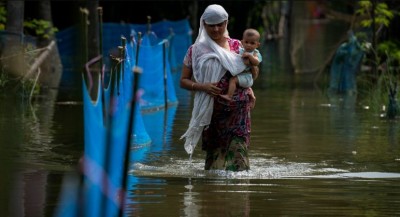