Tragic road accident on Agra-Lucknow Expressway, 5 died on the spot Lucknow: The news of the death of 5 people has been reported in the horrific road accident on the Agra-Lucknow Expressway in Uttar Pradesh. The accident occurred late Monday night near Arwal in Bilhaur Kotwali. According to the information, the roadways bus going from Agra to Muzaffarpur went uncontrolled and crashed into a car. The collision was so strong that 5 people in the car died on the spot.

20 people are said to have been injured in the accident. The injured have been admitted to the hospital for treatment. This is the second dreaded road accident on the Lucknow-Agra Expressway within the last 24 hours. Police is trying to know whether the bus's steering failed or the driver had a nap. According to the information, the Volvo bus of Bihar State Transport was going to Muzaffarpur in Bihar with 40 passengers from Agra.

A high-speed car from Lucknow was going towards Delhi. At around 12:45 pm on Monday, the roadways bus suddenly became uncontrollable and hit the car on the second lane and broke the railing and fell down from the bridge. The collision was so severe that the test of the car blew up. 5 people in the car died on the spot. While 20 passengers sitting in the bus have been seriously injured.

Government set target till 2030, child marriage has to end from root 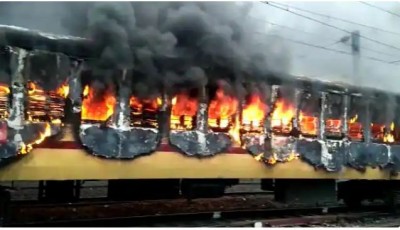