Dehradun: In Uttarakhand, the cold wave has increased as the weather conditions change. The morning also started with light fog on Thursday. Meanwhile, most parts of the state are cloudy. The Met department has predicted snowfall in hilly areas of the state, especially in Pithoragarh, Chamoli and Bageshwar districts of more than 3500 metres. Light rain may also occur in most areas.

The high Himalayan areas of Pithoragarh and Bageshwar recorded a drop in temperature due to snowfall and cloudy conditions across Kumaon. The high Himalayan region of Hansling, Rajrambha, Panchachuli, Darma, Vyas, Chaundas Valley received snowfall on Wednesday evening. In Bageshwar, light snowfall occurred at high altitudes of Jaatali, Furkia and Dhakuri in Pindar valley. Cold winds triggered by snowfall in higher reaches continued to chill the people.

Waterfalls and carts flowing in the Niti Valley have been converted into the snow. Drains have also accumulated in Mana Valley. Rishiganga has also been completely frozen in the Niti Valley. Mangala Kothiyal says it is getting cold due to a lack of rain and snowfall. People in the city areas are resorting to bonfires to escape the cold. Along with Joshimath, cold wave conditions are prevailing in Pokhri, Ghat, Gairsan, Tharali, Dewal, Karnprayag, Gauchar, Peepalkoti and Nijmula valleys in the morning and evening. The same changing weather is harmful to health. Respiratory patients may face more difficulty due to poor air quality. It is important that we exercise the necessary vigilance. 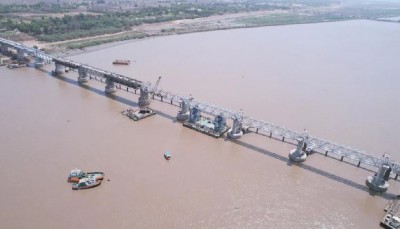