There are many reports about Vicky Kaushal and Katrina Kaif's wedding these days. It was reported that the wedding functions would last for 3 days. The wedding ceremony will be held from December 7 to December 9 at shahi fort in Sawai Madhopur in Rajasthan. But now the news is completely confirmed. Preparations have also been started at the administrative level in Rajasthan before the wedding. Therefore, as soon as the district collector's letter appears as part of the necessary meeting, it has also been sealed. According to media reports, a letter from the Collector of Sawai Madhopur district has gone viral on social media in which the necessary meeting in view of Vicky and Katrina's wedding has been convened on December 3.

Both Vicky Kaushal and Katrina Kaif are famous Bollywood stars and have excellent fan following. The district administration is responsible for the security arrangements being beefed up as soon as the news of their wedding is received. Several VIP guests are also scheduled to attend the wedding. According to media reports, PMO level officials will also be wedding guests. In such a situation, the responsibility of their safety is also the responsibility of the district administration. A meeting has been convened on 3rd December to ensure that there is no mistake in this regard. The letter, which has been doing the rounds in the media, calls for a meeting in view of the preparations. 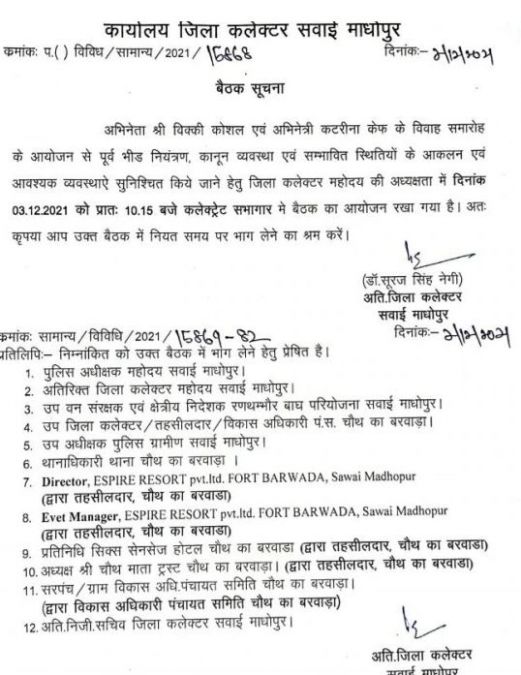 The same news is that both Katrina and Vicky want to register their marriage in court so they will have a court marriage in Mumbai on December 3. The rest of the rituals will be played at Sawai Madhopur in Rajasthan. For which his family will reach the wedding venue by December 6. And every wedding ceremony will be performed from December 7. On December 9, the two will marry hindu customs and become one another forever. It is also learnt that the two have signed a deal with an international magazine for their wedding photos. So fans will have to wait a little longer for the wedding photos.