New Delhi: Former Indian cricket team captain Virat Kohli has once again failed to score big. In the Edgbaston Test, the Indian cricket team batted first and India's condition worsened on the first day itself. Virat Kohli, popularly known as the run machine, also got out for just 11 runs and proved to be a failure in this very important Test match. Virat Kohli's failure has been going on for a long time, in such a way, that the anger of fans has broken out on him.

@imVkohli pajji aap apne naam ke hisab se nahi khel raho ho. we are waiting for your hundred. But today you disappointed us at edgbaston.

Since the dismissal of Virat Kohli on social media, a large number of reactions started coming in. People on social media were writing that Virat Paaji is not playing according to your name. We're looking forward to your 100, but you disappointed again at Edgbaston. Some fans wrote on Twitter that Virat Kohli is an overrated player. While the fans wrote that it has been 950 days since Virat Kohli's bat got a century. A flurry of similar comments was pouring in on Twitter. 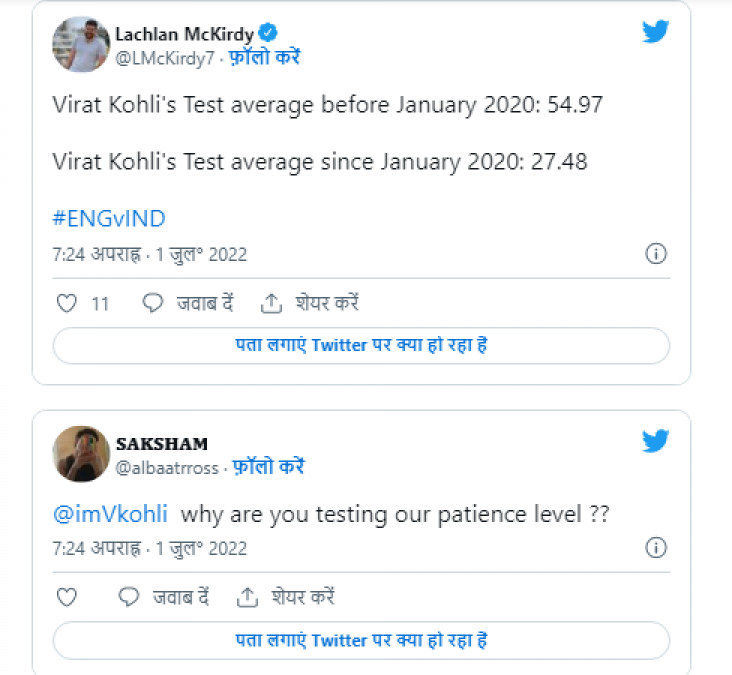 Let us know that Virat Kohli scored only 11 runs in the first innings of the Edgbaston Test. England's young player Matthew Potts took his wicket, taking the edge of Virat Kohli's bat and the ball went straight into the stumps. If we talk about Virat Kohli, then he has not been able to do any special wonders in this series. Virat has scored only 229 runs in five Tests. Virat Kohli has not scored a century in international cricket since 2019.