According to reports, the divorce case lasted for four years but now the two got divorced. In their joint statement issued recently, Vivian and Vahbiz expressed grief. According to a report, he said, "With great sorrow, we declare that we are legally separated and are now divorced. We had been working hard for it for a few years to make it possible for us to do so properly. We have come to the conclusion that we will continue our life journey separately. We have taken this decision by mutual consent and there is no need for any debate as to what caused this divorce or separation. '

In a further statement, he said, "We request our fans to understand us. We have driven our relationship privately and it is difficult for us to discuss the details of our personal lives. I hope we continue to do our job like this with the love and support of all our fans. We hope that the love and support we have received over the years is the same love that we have received from our fans in the future.''

While talking about divorce, Vivian said, "My relationship with Vahbiz has come to a conclusion. We decided to close this chapter for the betterment of both. Every end is followed by a new beginning and I hope it is good for both of us. On the other hand, Vahbiz spoke on the other hand and said, "Vivian and I have decided to part ways amicably. It's now a closed chapter. A new life full of happiness and peace awaits both of us and I wish them all the best.'' 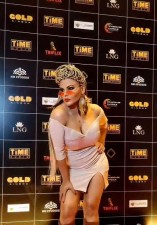