New Delhi: Former Shia Waqf Board Chairman Wasim Rizvi has prepared the Quran-e-Majid by removing 26 controversial verses from the Muslim holy book Quran. He has written to PM Narendra Modi in this regard. Wasim Rizvi said that 26 verses of the Quran mention atrocities, religious frenzy, so he wrote a new Quran and wrote a letter to PM Modi demanding that the old be banned. 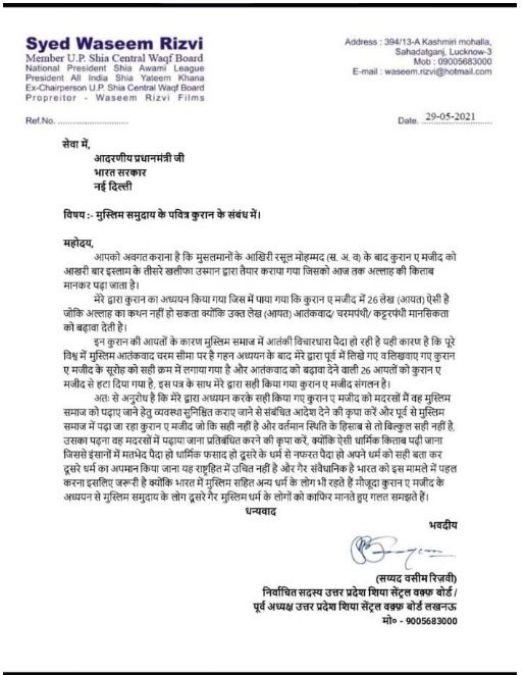 In the letter, Rizvi writes that the Quran was studied by him. It found that there are 26 Majid (verses) in the Quran-e-Majid which are not the statement of Allah as the said verse acts as a boost to terrorism/extremist/radical mentality. He further wrote that the verses of these Qur'an are creating terrorist ideology in the Muslim society. That is why Muslim terrorism is at its peak all over the world. Rizvi said that after a thorough study, the suroh of the quran-e-majid, written and written earlier, has been put in the right order and 26 verses that encourage terrorism have been removed from the Quran-e-Majid.

Wasim Rizvi had earlier moved the Supreme court seeking removal of 26 verses from the Quran. The argument behind Wasim Rizvi's petition in the Supreme Court was that some of these 26 verses of the Quran were promoting terrorism, which have been later added.