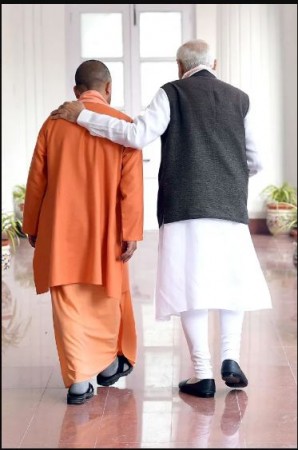 He made a statement on social media, showing two photos of himself walking with Prime Minister Narendra Modi. He adds in this statement: "We've set out to create a new India by swearing an oath, surrendering our hearts and minds, and insisting on growing a sun that rises above amber. You're probably aware that Prime Minister Narendra Modi is in Uttar Pradesh for a three-day visit ahead of the state's forthcoming Assembly elections. Today, he is in Lucknow. The two leaders (PM Modi and Yogi Adityanath) are thought to have had conversations at the same time and taken selfies together while walking. After then, the chief minister posted it on social media.

The image is presently causing a stir all over the world, and some individuals are starting to embellish the image of New India in their minds. You may recall that two days ago, Prime Minister Narendra Modi dedicated irrigation projects in Mahoba, Uttar Pradesh, while also attending the Rashtra Raksha Samarthan Parv in Jhansi.

You are also fond of trekking so go to this place