New Delhi: The Supreme Court's remarks on the suspended BJP spokesperson Nupur Sharma for the brutal killing of Kanhaiyalal in Udaipur have created a stir across the country. A large number of people are opposing this comment. Let us know that, Supreme Court Judge Surya Kant had said on Friday that Nupur Sharma is solely responsible for the incident in Udaipur and because of h, the entire country has been on fire. This comment of the Supreme Court is being strongly opposed. People say that why did the court not utter a word about the fanaticism, due to which Kanhaiyalal's throat was slit by entering the shop? Due to this, #SupremeCourtIsCompromised and #BlackDayForIndianJudiciary are trending fiercely on social media. 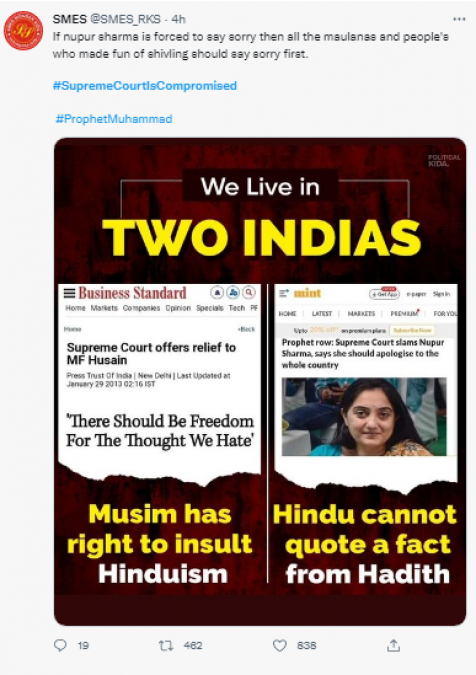 On social media, people are saying, "How can the Supreme Court justify such a terrorist act?'' Shafali Vaidya wrote, "Justice Kant and Pardiwala have originally legitimised the threat to kill #NupurSharma. #BlackDayforIndianJudiciary.'' 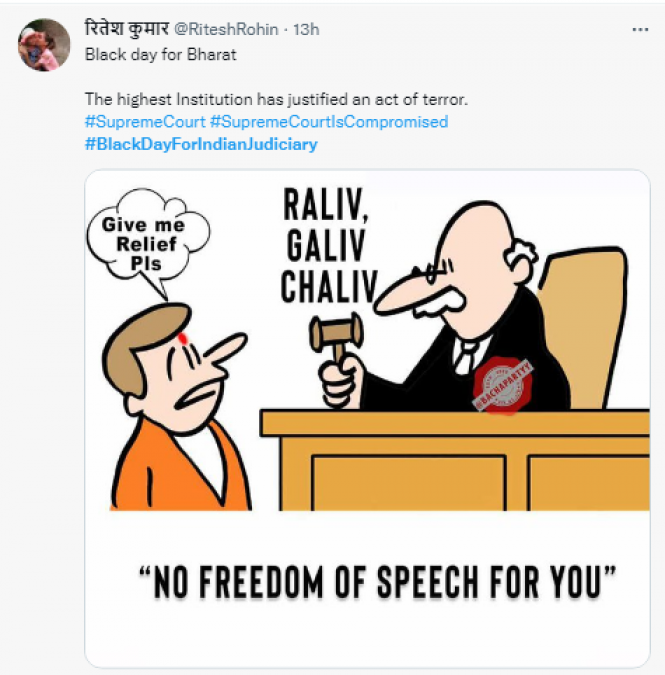 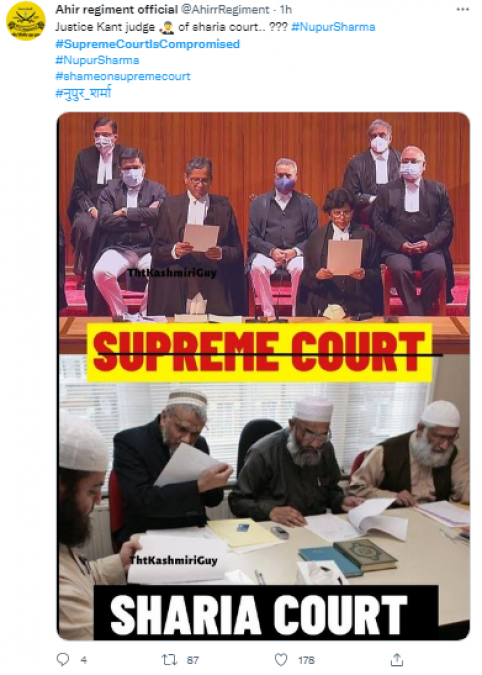 People say that, if Maulana Ilyas Sarfuddin had insulted the God of Hindus by calling the Shivling a 'private part' in a TV debate, would his murder be justified? In this way, there will be no such thing as a law in the country. One Twitter user wrote, "Is this sharia court? Nupur had come with a demand for shifting her petitions to Delhi. If not, it would have been forbidden to do so. What is the need to say all this? She is being made guilty without a hearing.'' At the same time, some users are also asking that if Nupur Sharma is responsible for Kanhaiyalal's death, then who is responsible for the murder of Kamlesh Tiwari and Kishan Bharwad. Not only this, but users are also pointing fingers at Supreme Court judge Surya Kant. One of the users said, "The judges have convicted Nupur, one of them is Justice Pardiwal, who has been a Congress MLA from 1989 to 1990, and the other is Justice Surya Kant, who has been subjected to serious allegations of corruption, due to which Justice AK Goen had also opposed his appointment." 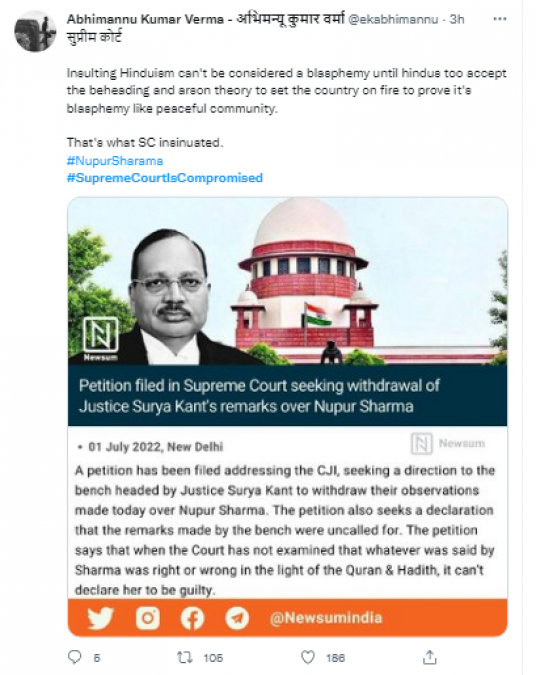 At the same time, one user has written that 'If he repeatedly calls the Shivling a private part, then listens quietly, otherwise leave from there, even if he provokes, do not say anything.' Because if you say something, they will kill you and the court will accuse you of your murder on your 'speaking.' Another  user wrote, "If understood by example, one person did not tolerate the insult, he insulted in retaliation, while the other person did not tolerate the insult and he killed." Now the country's highest court had to see which of the two is the biggest culprit?  According to the court - the one who gives the guilty statement is the culprit, not the killer.