Lucknow: A case has come to light from Lakhimpur Kheri district of Uttar Pradesh, embarrassing the husband-wife relationship where the wife along with her lover killed the husband. The deceased Munzer was murdered around 2 pm on February 2. The police have registered a case against two people, including Nizamuddin, living in the village, on the complaint of the deceased's brother.

In the interrogation of Nizamuddin, he has disclosed that he, along with the wife of the deceased, killed Munzer by cutting his throat with a sharp weapon. In this whole case, the wife of the deceased gave full support. Lakhimpur Kheri SP Vijay Dhul told that on the night of February 2, information was received that Munzer, who lives in the village, has been killed. Police immediately reached the spot and the body was rushed to the postmortem.

Police found out in the investigation that the wife of the deceased had an illicit relationship with Nizamuddin, to which the deceased had objected several times. There was also some quarrel between the deceased and the accused over money. For this reason, the wife and lover killed Munzer together.

College girl murders by her lover in Bihar

Huge rogue of miscreants in Haryana, women robbed in daylight

Forest guard shot his own murder in Madhya Pradesh 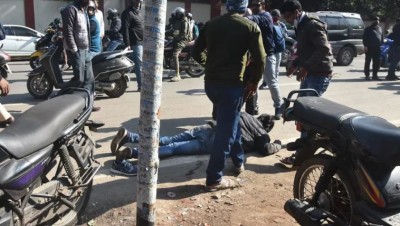