New Delhi: The matter of the disputed Gyanvapi complex in Varanasi is in discussions these days. On one hand, this matter is in the court, on the other hand, after the survey conducted on the orders of the court, now the pages of history are also being turned. If the pages of history are being turned, then the matter has reached Aurangzeb and Mughal times. The British period is also being mentioned. Meanwhile, now an article written by Mahatma Gandhi has also come in the headlines. A picture of an article published in a monthly magazine by the name of Mahatma Gandhi is going viral on social media. 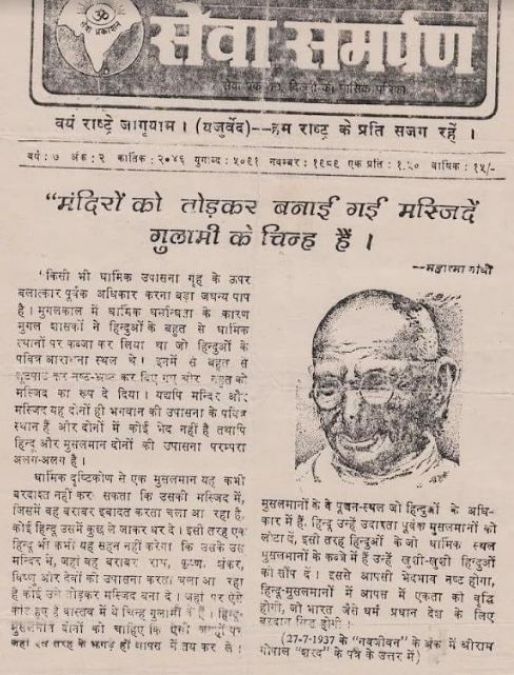 In the viral picture of this article published in this magazine called Seva Samarpan, reference is given to the issue of 'Navjeevan' dated 27th July 1937 at the bottom. It is told that Mahatma Gandhi wrote in response to a letter from Shri Ram Gopal 'Sharad' that mosques built by demolishing temples are a sign of slavery. In this, Mahatma Gandhi has written that it is a great and heinous sin to forcefully occupy any religious place of worship. During the Mughal period, due to religious fanaticism, the Mughal rulers occupied many religious places of Hindus, which were the holy places of worship of Hindus. It is further written that many of these shrines were looted and destroyed and many were given the form of mosques. Temple and Mosque both are holy places of worship of God and there is no difference between the two, but the worship tradition of both Hindu and Muslim is different.

In this article, which is printed in the name of Mahatma Gandhi in the viral picture, it is written that from the religious point of view, a Muslim can never tolerate that a Hindu should bring anything to his mosque. Similarly, a Hindu will never tolerate that his temple should be demolished and a mosque should be built. It is written in this article that where such incidents have happened, in fact they are a sign of slavery. Both Hindus and Muslims should decide between themselves in such places where there are such disputes. Those places of worship of Muslims which are in the possession of Hindus, Hindus should generously return them to Muslims. Similarly, the religious places of Hindus which are under the control of Muslims, they should happily hand over them to Hindus. This will destroy mutual discrimination. Unity will increase between Hindus and Muslims, which will prove to be a boon for a religious country like India.