Three eliminations in a single Elimination Chamber match was the record held by Goldberg, Carlito, and The Undertaker, but Strowman set a new record tonight with five eliminations. Strowman competed against six other superstars in the Men’s Elimination Chamber match to determine the No.1 Contender for Brock Lesnar’s Universal Championship. Strowman lasted until the end of the match but was eliminated after two spears from Roman Reigns.

Strowman’s first eliminated The Miz, but his actions caught the attention of the other chamber participants and led to Strowman being targeted. John Cena, Roman Reigns, Finn Bálor, and Seth Rollins, all hoisted Strowman up for a Shield Powerbomb and covered him at the same time, but the former Wyatt Family member kicked out and demonstrated his tenacity.

Cena, Rollins, and Bálor would each attack Strowman with their finishers, but none of them was able to keep Strowman down for the count and all three men, plus Elias, were eventually eliminated by the "Monster Among Men". The record for the most eliminations in the history of the Chamber is held by Chris Jericho at 10, followed by Triple H at seven, The Undertaker at six, and a newly found three-way tie between Randy Orton, CM Punk and Strowman. 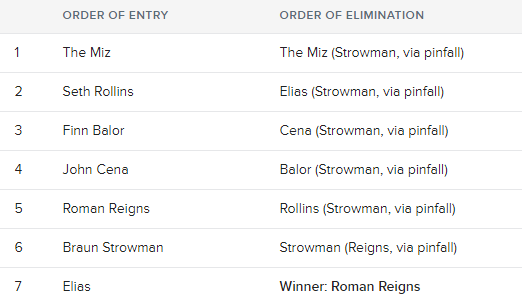