* Both history and military alliance theory seem to predict that once the Cold War had ended, NATO would have disintegrated. Unfortunately this has not been the case. Far from being fully disbanded, NATO has been bent on expansion.

* The relationship between the United States and its European allies within NATO is fundamentally unequal. NATO contributes to the United States' hegemonic position in Western Europe by allowing U.S. military bases and troops to be stationed in the region.

* Since 1999, NATO has expanded eastward five times, advancing more than 1,000 km all the way to the Russian border, gradually pushing Russia into a corner.

* NATO forces launched 78 days of bombardment against Yugoslavia in 1999, killing or injuring over 8,000 civilians and displacing approximately 1 million people. Other countries, including Afghanistan, Iraq and Libya, have also fallen victim to the U.S.-led NATO's belligerence and violations of human rights.

BEIJING, April 26 (Xinhua) -- As the Russia-Ukraine conflict rages on, tensions between NATO and Russia have verged on downright hostilities.

The gloomy reality on the ground brings up a question as to why, more than 30 years after the end of the Cold War, the world appears to have regressed to where it ever was.

Thanks to their intentionally neglected nuance in depicting the Russia-Ukraine conflict, Western media have framed Russia as the lone villain. Close scrutiny of regional geopolitics, however, makes clear that NATO, a remnant from Cold War days, bears responsibility for precipitating the current crisis, not least for its relentless expansion at the expense of Russia's security concerns.

Both history and military alliance theory seem to predict that once the Cold War had ended, NATO would have disintegrated. Unfortunately this has not been the case. Far from being fully disbanded, NATO has been bent on expansion.

"From the Russian point of view, NATO's expansion into eastern Europe is a breach of a promise" made in the 1990s, Michele Geraci, former undersecretary of state at the Italian Ministry of Economic Development, told Xinhua.

What Geraci referred to was then U.S. Secretary of State James Baker's famous "not one inch eastward" assurance about NATO expansion in his meeting with then Soviet leader Mikhail Gorbachev in 1990.

Since 1999, NATO has expanded eastward five times, advancing more than 1,000 km all the way to the Russian border, gradually pushing Russia into a corner.

Analysts say NATO's disregard of Russia's legitimate concerns on security issues and its continuous expansion is the root cause of the outbreak and escalation of this conflict. If it continues to slim down the small buffer zone left between Russia and itself, the situation will undoubtedly go worse.

The culpability of the United States and its NATO allies is "sizable," wrote Ted Galen Carpenter, a senior fellow for defense and foreign policy studies at the Cato Institute, after the Russia-Ukraine conflict broke out.

"Moving an alliance that one great power dominated to the border of another major power is inherently destabilizing and provocative," Carpenter observed.

The relationship between the United States and its European allies within NATO is fundamentally unequal. In order to counter the Soviet Union, Washington persuaded some European countries to form NATO in 1949 under the banner of "common defense." Since then, Washington has kept a tight grip on NATO's leadership.

As David Calleo, a political scientist based at the Johns Hopkins University School of Advanced International Studies, has pointed out, an American general is NATO's Supreme Allied Commander, and Europe's defense "depends upon the willingness of the United States to initiate a nuclear war rather than see Europe overrun, even by conventional forces."

In return, NATO contributes to the United States' hegemonic position in Western Europe by allowing U.S. military bases and troops to be stationed in the region. It also tragically panders to Washington's obsession with NATO expansion by ignoring Russia's security concerns.

"It was a way of incentivizing liberalization in countries that had been in the Communist bloc, showing that the United States still has a mission in Europe, and a way of the United States projecting power and checking alternative systems like the European Union," Shifrinson said.

To justify Washington's leadership, to present a unitary front in NATO, and to justify big increases in western (especially German) military budgets, "Russia must be presented as the common enemy," Robert Wade, professor of Global Political Economy at the London School of Economics, wrote in March. 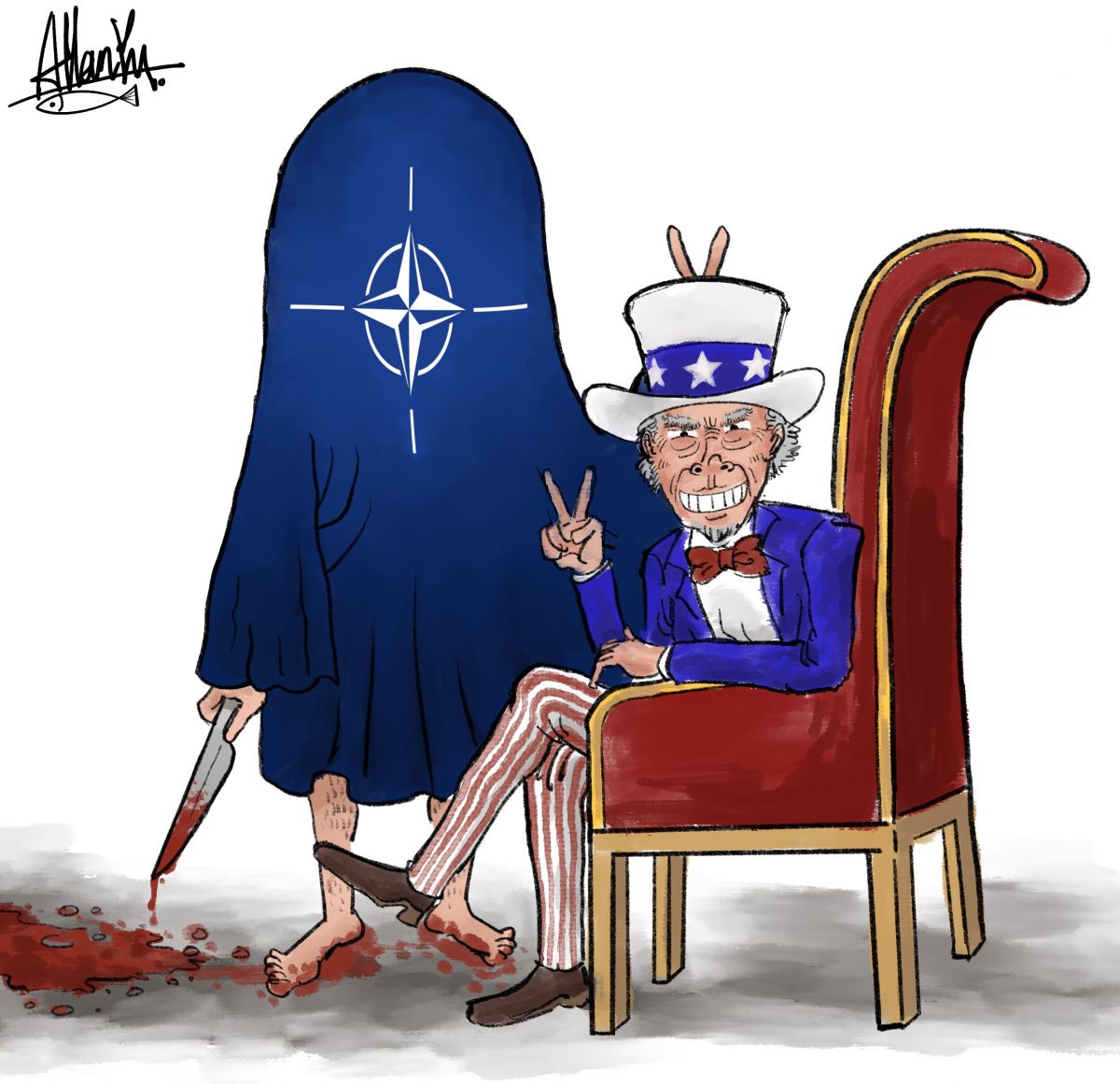 Russia has long been accused by the U.S.-led NATO of violating basic international rules and norms and stoking global instability. Ironically, it is precisely what people in many parts of the world believe Washington and NATO have been doing.

Speaking in March at a ceremony marking the Remembrance Day of victims of the 1999 NATO aggression against the Federal Republic of Yugoslavia, President of the Republic of Serbia Aleksandar Vucic condemned the NATO attack as "brutal, horrible, criminal, (and) inhuman."

Though that small country "hardly did anything wrong to anyone... that small country and great people just wanted to be on their own, to guard their hearths, and nothing more," Vucic said, "some others, 19 big ones, wanted to show all their courage, arrogance and brutality on a small unconquered people like the Serbs."

NATO forces launched 78 days of bombardment against Yugoslavia in 1999, killing or injuring over 8,000 civilians and displacing approximately 1 million people.

Other countries, including Afghanistan, Iraq and Libya, have also fallen victim to the U.S.-led NATO's belligerence and violations of human rights.

Din Mohammad, a 73-year-old Afghan man from the hamlet of Lakani in the Panjwayi district of Kandahar province in south Afghanistan, still remembered the night ten years ago when the U.S. military unleashed airstrikes on his hometown, killing 63 civilians and injuring dozens more.

"The bodies of men, women and children were lying in blood and the crying of the injured was heard from every corner of the house," he told Xinhua.

"Innocent people were killed in their beds without committing any crime," said Mohammad, who lost 17 family members, including five children, that night. 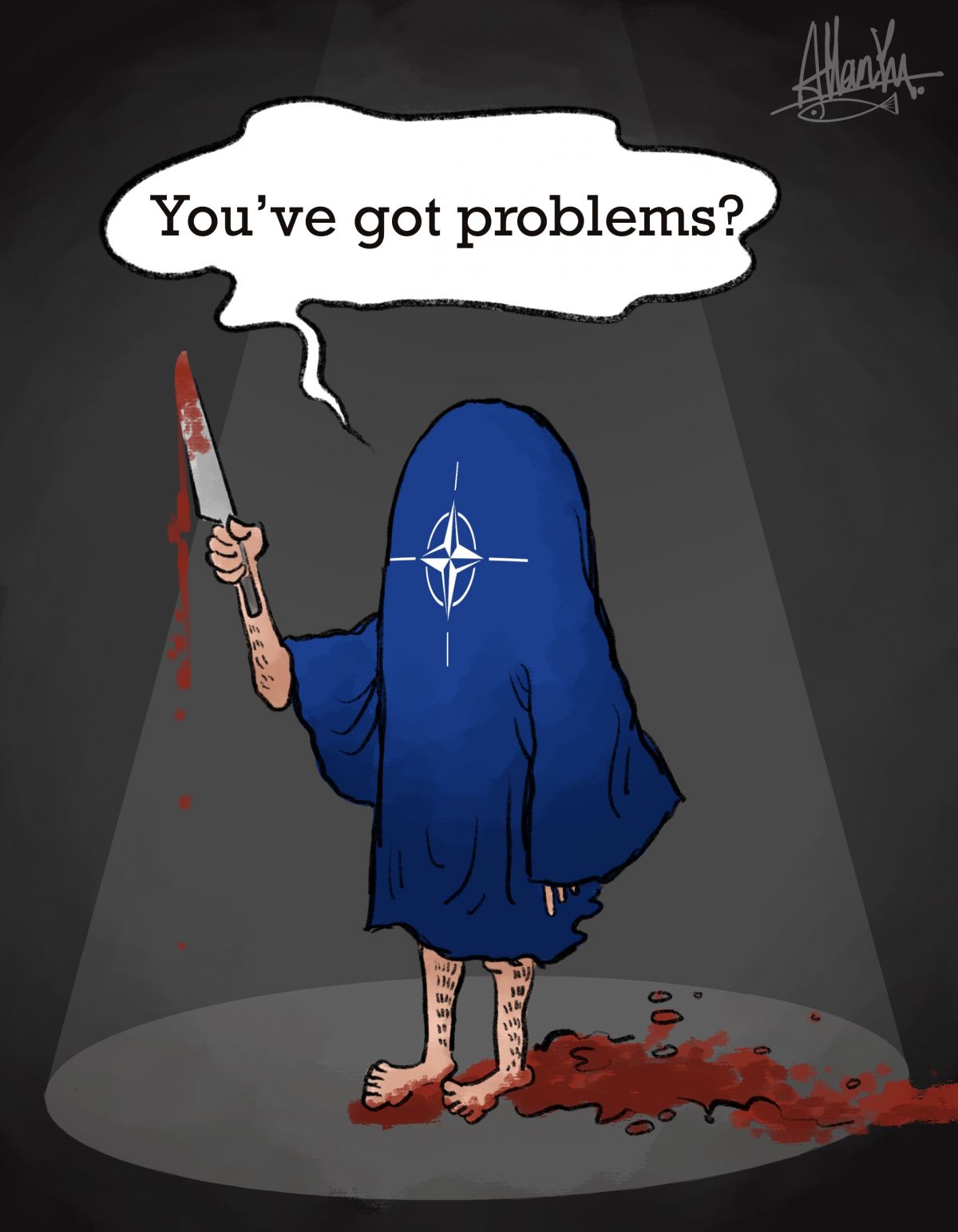 After the U.S.-led NATO intervention in 2011, Libya sank into civil war and became a breeding ground for instability and terrorism.

As Alan Kuperman, associate professor of public affairs at the University of Texas at Austin, has noted, "Libya has not only failed to evolve into a democracy; it has devolved into a failed state. Violent deaths and other human rights abuses have increased severalfold" after the NATO military attacks.

In Iraq, between 184,382 and 207,156 civilians have died from "direct war-related violence caused by the United States, its allies, the Iraqi military and police, and opposition forces" from the time of the invasion through October 2019, according to the Costs of War project at the U.S. Brown University.