Some of the people knows only to trouble others even they are not baring a 16-years-old girl who have turned actor with last release blockbuster film of Aamir Khan starrer 'Dangal'.

We are talking about young Geeta Phogat of the film Zaira Wasim, the girl who with her portrayal of Geeta stunned every one in the audience. Zaira after meeting CM of J&K have been facing criticism and trollers are trolling her without any genuine reason.

Later she apologized for no sense. Still, people can't leave her in her world. Zaira is again in headlines as yesterday sports minister Vijay Goel made comparison of her story to a painting of a girl in a hijab.

To see, he had tweeted, "This painting tells a story similar to @zairawasim, पिंजरा तोड़ कर हमारी बेटियां बढ़ने लगी हैं आगे | More power to our daughters!" A 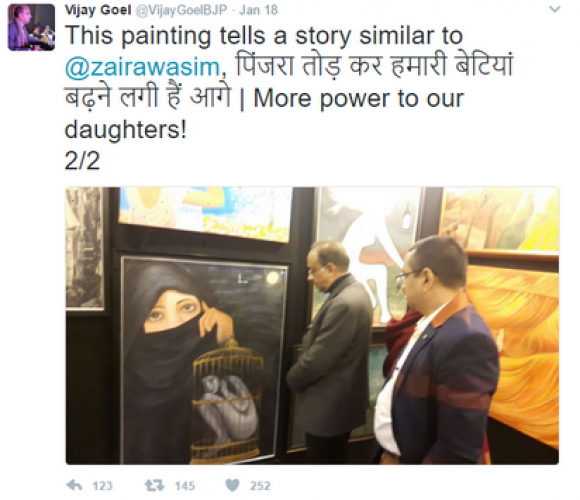 fter the minister's tweet, Zaira has replied in a series of tweets which reads as, "@VijayGoelBJP Sir, with all respect to you, I feel I must disagree. I request you not to connect me to such a discourteous depiction. Women in hijab are beautiful andfree. Moreover, the story depicted through this painting is not even remotely relevant to mine." 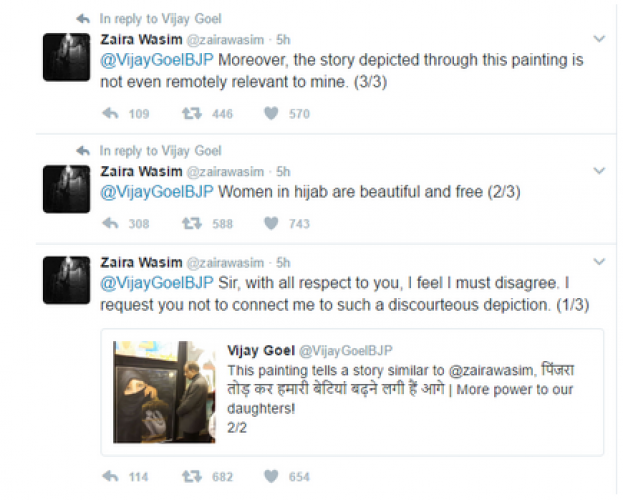