Actor, director and writer Neeraj Vora passed away on Thursday after in the state of coma more than a year.He was 54 years old.Neeraj Vora born on 22 January 1963.He was an Indian film director, writer, actor and composer from Gujarat.He made a grade in Bollywood with his work as a writer for Aamir Khan's film Rangeela. His directorial debut was Khiladi 420 in 2000. Later in 2006, Neeraj wrote and directed Phir Hera Pheri. He has gone through a brain stroke in October 2016 putting him in a coma. He was working on Hera Pheri 3 before he went into the coma, and died in December 2017.

Moviemaker Ashoke Pandit mourned the demise of his 'dear friend' on Twitter and said Vora was on the ventilator from the last few days and expired due to multi-organ failure. 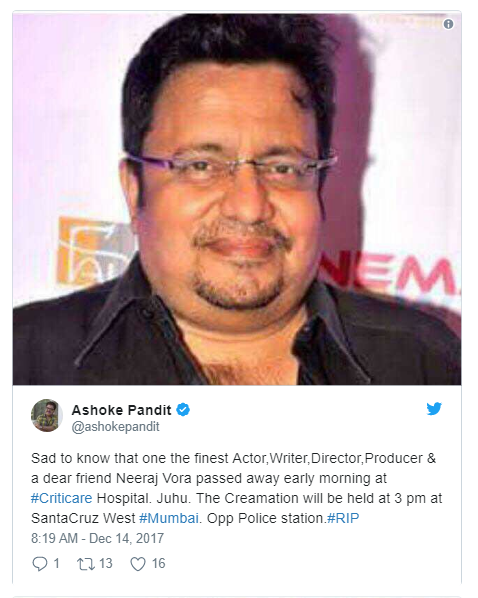 "Sad to know that one the finest Actor, Writer, Director, Producer & a dear friend Neeraj Vora passed away the early morning at #Criticare Hospital. Juhu. The Cremation will be held at 3 pm at Santacruz West #Mumbai. Opp Police station.#RIP," he tweeted.

"Writer, Director, Actor, Producer Neeraj Vora was on the ventilator from last 4 days & expired due to multi-organ failure. The Cremation will be held today at 3 pm today at the Santa Cruz west. Cremation Ground," he added.Vora acted in films like 'Company', 'Pukar', 'Rangeela', 'Satya', 'Baadshah' and 'Mann'.He penned down 'Hera Pheri' and directed 'Phir Hera Pheri' and 'Chachi 420