2k17 has been a marvellous year for Akshay Kumar. Khiladi Kumar delivered a hit Jolly LLB 2 in the first half of 2017 and ended the year with blockbuster Toilet: Ek Prem Katha. After having a great year end of 2017, Akshay Kumar is all set to have a bigger and better 2018 with three films happiness to different genres.Akshay Kumar will start out 2018 with R Balki's Padman which letting on 26th January 2018. The film apart from Akshay Kumar also stars Sonam Kapoor and Radhika Apte and is produced by Twinkle Khanna's production house Mrs Funnybones Movies. The trailer of the film was released recently and it received a thumbs up from the multitude and as we head towards the new year, the makers of Padman have released yet another poster of this inspiring story. 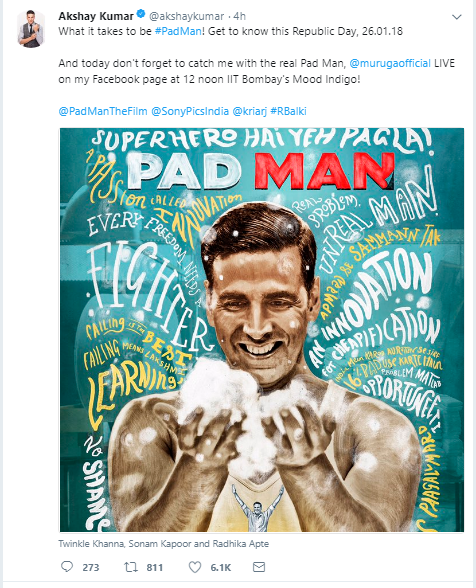 “If you change nothing, nothing will change. It’s not about being bold, but about breaking taboos that hold us back," Akshay Kumar said in an earlier interview. The Padman actor akshay kumar further had added, "I have lived with women all my life, yet I have learnt more about the topic while making this film than ever before. I do not mind who I offend or whose stomach I turn by being bold, this is not the Stone Age; menstruating is natural.”