'Pasmanda Muslims' support action on PFI, said- In the name of Islam... New Delhi: The All India Pasmanda Muslim Mahaj has issued a press release on the crackdown (arrest) on members of the radical Islamic outfit Popular Front of India (PFI). In the press release, the Pasmanda Muslims' organisation said that 'PFI is trying to mislead the country by acting as a protector of Islam. We have consistently opposed their policies and requested a ban on them.' 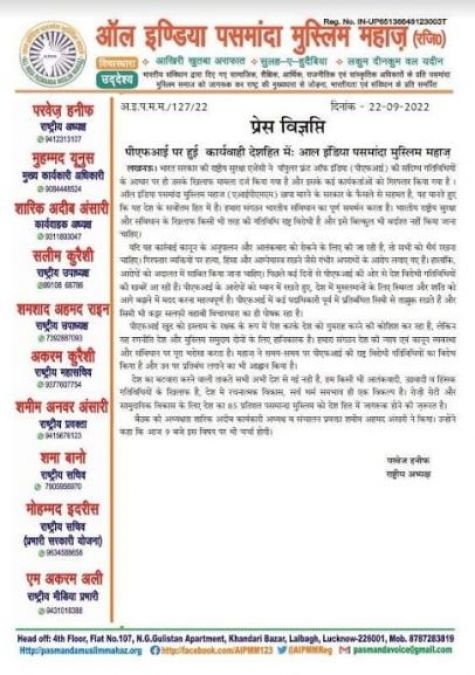 The Pasmanda Muslims' Association has said in the release that the National Security Agency of the Government of India has registered a case against PFI on the basis of its suspicious activities and many of its activists have been captured. The All India Pasmanda Muslim Mahaj agrees with the government's decision to conduct the raid. assuming that it is in the best interest of the country. Our organisation fully supports the Indian Constitution. The press release also said that any activity against Indian national security and constitution is anti-national and should not be tolerated at all.

In a press release, the Pasmanda Muslims' Association said that if this action is being taken to comply with the law and prevent terrorism, then everyone should be patient. The arrested persons have been charged with serious offences like murder, violence and possession of arms. However, the allegations must be proved in court. The release said that for the last several days, there have been reports of anti-national activities from PFI. In the wake of the PFI's allegations, it is necessary for Muslims in the country to help advance peace and stability.

The PFI is trying to mislead the country by projecting itself as a defender of Islam, the organisation said in a release. However, this strategy is harmful to both the country and the Muslim community. Mahaj has time and again opposed the anti-national activities of PFI and has also called for a ban on them. The organization said that the forces that divided the country have not left the country yet. We are against any terrorist, militant and violent activities. 85% of Pasmanda Muslims of the Muslim community support this action.

PFI aims to make India an Islamic country by 2047:

Radical Islamic organization PFI is working on 'Mission 2047' to make India an Islamic nation. Bihar Police has busted this conspiracy. PFI is planning to make India a Muslim country by 2047 and PFI has planned for it in four stages. This has been revealed in the recovered document, in which the fundamentalist organization clearly says that an Islamic country (Pakistan) was separated from India 75 years ago and by the time India celebrates 100 years of independence in 2047, India will be completely transformed into an Islamic nation. Police said that the document also states that 10 per cent of Muslims are enough to make the majority sit on their knees and if 10 per cent of Muslims join the PFI, then no one can stop India from becoming a Muslim country by 2047.

PFI has made a plan in four stages to make its mission successful, including connecting more and more Muslims with PFI and waging war against the country. It is clearly written in the document that Muslims have to unite and divide Hindus. Not only this, the PFI will prepare Muslims as marshals and then these people will attack people who oppose Muslims. In the fourth phase, the PFI will also try to take over power and for this, they are also ready to fight with India. PFI has said that Islamic countries of the world will also help it in this work. Let us know that many terrorist organizations are also working on this mission, in such a situation, the collusion of PFI and terrorist organizations cannot be ruled out.

Maharashtra: Youth going to become Agniveer dies after being cut by train