Anand Mahindra, the country's well-known businessman and chairman of Mahindra & Mahindra, remains in the news for his Twitter posts every day. He posts something that goes viral after posting. Now Anand Mahindra has again posted one such video, seeing which you will not be able to stop laughing.

Mahindra Chairman Anand Mahindra has shared a video of a mobile marriage hall this time. Now you may be wondering how this is possible. So first of all, let's talk about the marriage hall seen in this video. So let me tell you that the video shared by Anand Mahindra. A big truck is seen running on the road. Then it stops at one place and the people in it start setting the frames made inside the truck as soon as the rear part of it opens.

I’d like to meet the person behind the conception and design of this product. So creative. And thoughtful. Not only provides a facility to remote areas but also is eco-friendly since it doesn’t take up permanent space in a population-dense country pic.twitter.com/dyqWaUR810

After setting the folded parts, you see a hall equipped with AC with a designer fall ceiling in front of you. In the caption of the video, it is told that the area of this hall is 40X30 square feet and about 200 people can come to this portable hall. Subsequently, the video shows a scene of a felicitation ceremony and a wedding ceremony being concluded in this hall. With this post, the Mahindra chairman praised this mobile marriage home. Sharing the video of this on-the-go marriage hall, Anand Mahindra expressed his desire and wrote, "I want to meet the concept of such a product and the person behind this design. It's definitely very creative and thoughtful. This video is still everywhere.'' 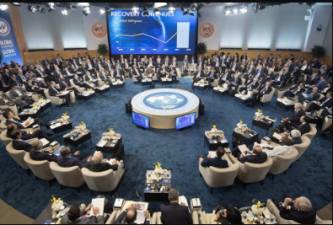