Jaipur: Ahead of the Assembly elections in Rajasthan, the BJP has launched a Jan Akrosh Abhiyan, where BJP national president JP Nadda flagged off 51 Jan Akrosh Raths in Jaipur. BJP Raths will take out Jan Akrosh Yatra in all 200 assembly seats against the Congress government in the state. In a program organized at Adarsh Nagar Dussehra Maidan in Jaipur on Thursday, JP Nadda targeted the Gehlot government fiercely and accused the Gehlot government of changing the name of the central schemes while explaining the schemes of the Modi government at the center.

BJP chief JP Nadda said that the land of Rajasthan is a land known for sacrifice, penance, and bravery, I bow to this land and hope that the Jan Akrosh Yatra will get the full support of the people of Rajasthan, here in the last 4 years, the Congress has worked to hoodwink the people. Before Nadda, Satish Poonia, Vasundhara Raje, and Gulab Chand Kataria also addressed the public meeting.

Let us tell you that BJP's Jan Akrosh Rath Yatra, which will leave from Adarsh Nagar ground, will go to 200 assembly constituencies of the state. At the same time, the Ashok Gehlot government in the state is completing four years on December 17. In such a situation, the BJP is going to the public through the Jan Akrosh Abhiyan where senior BJP leaders will also hold several public meetings on the failures of the government. 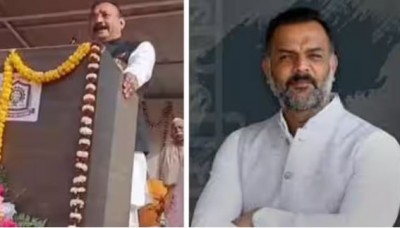