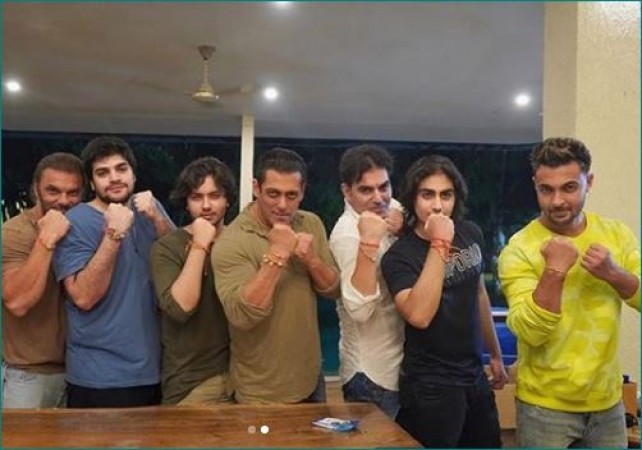 The festival of Rakshabandhan was celebrated with great pomp throughout the country. During this time, this festival was also celebrated with great respect in the Bollywood industry. From the Kapoor family to the Khan family, Rakhi was celebrated. Recently, Salman Khan has shared a photo of this festival. He has been celebrating every festival with the whole family. He also celebrated Rakshabandhan with the whole family. Arbaaz Khan, Sohail Khan, Atul Agnihotri Ayush Sharma, Arhan Khan, Nirwan Khan, and the rest of the family were involved with Salman Khan to celebrate this festival. Everyone's photos are going viral and fans are loving these photos very much.

All the family members including Salman Khan are posing in the same style and with this picture, Salman wrote in the caption, 'Happy Raksha Bandhan.' Salman Khan's two sisters are Alvira and Arpita. Salman is not shooting these days but yes he is very active on social media. He has also been seen cultivating in his farmhouse during the lockdown.

Sometimes he was seen driving a tractor and sometimes he was seen sitting on the ground. Talking about the work, Salman is going to appear in his upcoming film 'Radhe: Your most wanted Bhai'. Disha Patni, Jackie Shroff, Randeep Hooda will be seen with him in this film.

Genelia shares her wedding picture on Rakhi with brother