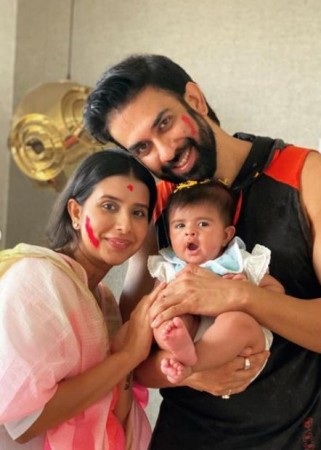 The news of the divorce between Rajiv Sen and Charu Asopa, the brother of famous Bollywood actress Sushmita Sen, has been going viral for a long time. Charu and Rajiv are also telling each other the reason for the divorce. Meanwhile, Charu has revealed her daughter's illness. She said her daughter is suffering from a serious illness and she has to fight the time of this problem alone. Recently, Charu has shared a video of herself on social media and by posting the video, she is telling fans about her daughter's recent situation. Charu said that Ziana has a disease of the hands, feet and mouth.

Recently, Charu Asopa recorded a video and told about her daughter's recent situation. Talking about daughter Ziana, she said that Ziana has an ailment of hands, feet and mouth. She also said in her video that due to the disease that Ziana has suffered, the child gets blisters in her hands, feet, face and mouth, due to which she is not able to eat anything. Charu said in the video that she was very scared about Ziana and reached the hospital with her daughter in the middle of the night.

Let me tell you, Charu is living separately from her husband Rajiv Sen these days. The news of divorce between the two has been coming for a long time and now the two openly talk about separation. Let me tell you, in June 2019, Rajiv and Charu took seven vows. Her wedding was attended by her family and special friends. Photos of the two related to their wedding also went viral on social media. Charu Asopa and Rajiv Sen became parents to a daughter last year. But even before the birth of the daughter, there were many problems in the marriage of both of them. Along with this, there was a lot of speculation about the divorce of the two this year as well.

VIDEO! What did Rakhi Sawant say in front of everyone, BF Adil started blushing