New Delhi: The Congress is engaged in protests from Parliament to Rashtrapati Bhavan against the action of the Directorate of Justice and Unemployment and the Enforcement Directorate (ED). Several party leaders are participating in this protest march. The march is being led by former Congress national president Rahul Gandhi. Today, all the Congress leaders in black clothes are protesting against the central government. Meanwhile, the Delhi police have detained several Congress leaders, including Rahul Gandhi, for staging a demonstration without permission.

Let me tell you that, the Congress is saying that this protest is against price rise and unemployment, but political pundits say that the ED's action is behind this anger of the Congress because leaders like Satyendra Jain, Sanjay Raut, Partha Chatterjee have been arrested on corruption charges and now the Congress is afraid that Sonia Gandhi and Rahul Gandhi may not be arrested anywhere. That's why they're trying to create this pressure.

Rahul Gandhi saddened by the end of corruption, so he is opposing ED- Ravi Shankar Prasad 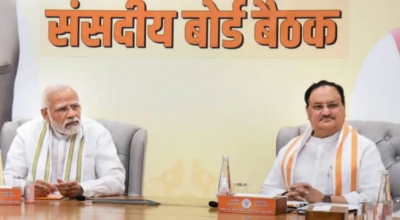