India won the fourth Test by 157 runs at the Oval on Monday, taking a 2-1 lead in the five-match series. India won the match after England were bowled for 210 after lunch on the last day, just over fifty years after their first Test — and series — victory in England at the Oval in 1971. After lunch, England were in a nice situation at 141-2 until left-arm spinner Ravindra Jadeja and fast bowler Jasprit Bumrah both struck twice in a stunning collapse that saw them lose four wickets for six runs in 36 balls.

Recalled paceman Umesh Yadav, who took 3-60, cleaned up the tail and ended the match when James Anderson was caught behind. Earlier in the match, visitors piled up 466 in their second innings after conceding a 99-run first-innings lead. Opener Rohit Sharma scored 127 — despite being missed twice in the slips — for his maiden Test century outside of India.

In both innings, India all-rounder Shardul Thakur, who was returned after suffering a hamstring injury in the drawn first Test at Trent Bridge, struck half-centuries, while the paceman also took England skipper Joe Root's important wicket on Monday.
The series concludes with the fifth Test at Old Trafford, Manchester, starting on Friday. 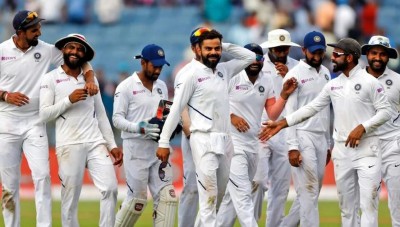