New Delhi: The way Hindu temples and evidence of Indian culture are being found one by one from inside mosques across the country, there has been a stir among Islamic fundamentalists. However, this entire dispute is going on in the court following the legal process and efforts are being made to resolve the matter on proper evidence and historical facts. But, some fundamentalist people are making ill-fated efforts to end these issues through mob system and spread panic in the society. In this episode, the radical Islamic organization Popular Front of India (PFI), inciting Muslims across the country, has asked them to oppose action against the structures of disputed mosques. 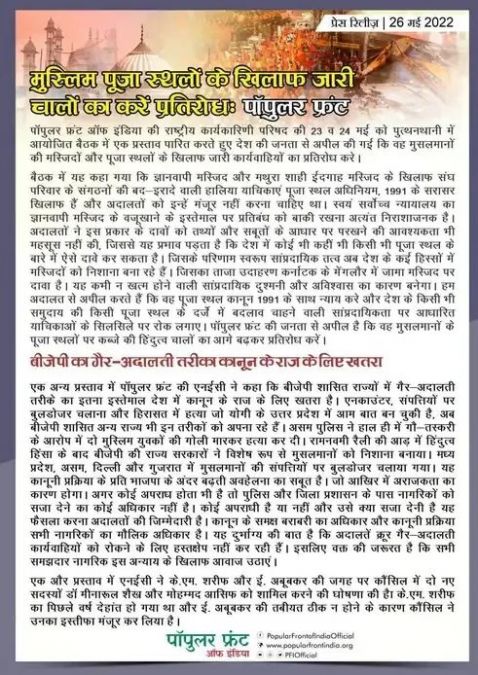 The meeting of the National Executive of PFI was held on 23 and 24 May 2022 at Putthanthani, Karnataka. During this, a resolution was passed by the PFI, inciting Muslims from all over the country to oppose the actions being taken against mosques. During the meeting, the petitions filed by Hindus regarding the Shahi Idgah Masjid in Mathura and the disputed Gyanvapi complex in Varanasi were said to be in violation of the Worship Act, 1991. PFI President OMA Salam has given a provocative speech saying that the way claims are being made on mosques, this will lead to the beginning of never-ending communal enmity. PFI provoking the Muslims and said that in all the BJP ruled states, Muslims are being oppressed there. It mainly mentions Uttar Pradesh, Madhya Pradesh and Assam. Along with this, PFI opposed the ban imposed on Vazukhana, questioning the court's decision in the Gyanvapi case. A letter has also been issued by the radical organization regarding this.

Let us inform that recently, while demanding to ban the radical Islamic organization PFI, the Sufi Islamic Board had accused it of collusion with terrorists. The Sufi Board had claimed that the PFI is affiliated with the terrorist organization Al Qaeda and works on the basis of the instructions given by it. Apart from this, the conspiracy of PFI has also been exposed behind the Hijab controversy in Karnataka. The central government had also told the Supreme Court on 28 April 2022 this year that the PFI's strings are linked to the banned Islamic organization SIMI, so now preparations are being made to ban it.