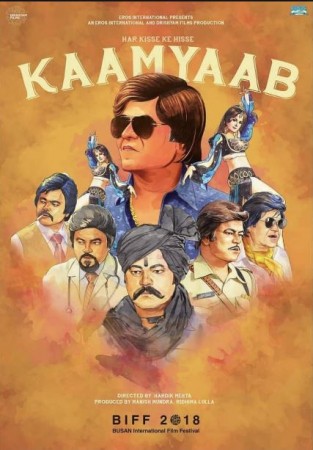 The makers of 'Kamayab' starring Hindi cinema's famous actor Sanjay Mishra have released the first poster of the film. Apart from this, in which Sanjay Mishra is seen in various avatars, along with this, one can get a bitter-sweet story related to the Bollywood actor actors. In addition, Red Chillies Entertainment is all set to introduce 'Kamayab' to the Indian audience.

The team has shared the poster on social media and writes, "Daaku se leke Doctor, Police se leke Mafia Get ready for the #ExtraSeExtraordinary kahaani of a character actor! #Kaamyaab trailer out tomorrow. Also in the film Sanjay Mishra, Talented actors like Sarika Singh and Isha Talwar can be seen alongside Deepak Dobriyal, and it is directed by debutant director Hardik Mehta, who has also won the National Award for his short film 'Amadwad Ma Famous'.

"Kamayab" produced by Gauri Khan, Manish Mundra and Gaurav Verma is ready for release on 6 March 2020. Apart from this, the film will be presented by Red Chillies Entertainment under Drishyam Films Production.