Ahmedabad: Just before the first phase of polling in Gujarat, the BJP made a sensational disclosure about the Aam Aadmi Party (AAP). The BJP has released a new video of AAP state president Gopal Italia, in which Italia is seen making derogatory remarks about the 'Swaminarayan sect' and followers. The BJP had earlier shared several videos of Italia, however, the AAP ignored calling it old.

Millions of Hindus across the world revere and follow teachings of Bhagwan Swaminarayan.

BJP IT cell chief Amit Malviya shared the video of Italia on Twitter and wrote, "AAP state president and Kejriwal's special Gopal Italia insulted the followers of Swaminarayan sect and called their faith foolish. Millions of Hindus all over the world follow the teachings of Lord Swaminarayan.'' In this video, AAP leader Gopal Italia is seen commenting in Gujarati on the food and drink of the Swaminarayan sect. Users' anger is also being seen on social media about this video of the AAP leader.

AAP leaders have described temples as hubs of exploitation:

The BJP had earlier also shared some videos of Gopal Italia. In one video, Gopal Italia made derogatory remarks about PM Narendra Modi's mother, while in another video, he described temples and stories as a den of exploitation. In this video, Italia said that people go to temples and clap like eunuchs. These videos of Italia had pushed AAP on the back foot for some time. The AAP could only say in its clarification that these videos are old when Italia was not a member of the 'AAP'.

Let us know that the number of followers of the Swaminarayan sect in Gujarat is very high. In such a situation, this new video can increase the difficulties of the Aam Aadmi Party. Gujarat had to go to polls on December 1 and 5 and the results will be out on December 8. In Gujarat this time, the AAP has also given its full strength amid the fight between the BJP and the Congress.

Militants are defeated by Somali troops to end the hotel siege 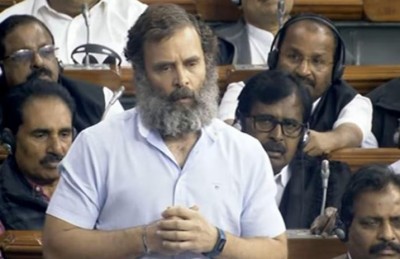