Ahmedabad: Two Hindu students have been punished at a Christian missionary school in Gujarat for greeting each other by saying 'Jai Shri Ram.' The incident took place last week at St Mary's School in the Vapi district. However, the school has apologised after protests by Hindutva organisations. According to the media report, two students of Class 9 shouted Jai Shri Ram slogans in the corridor of the school. He was then punished by the school management. He also threatened to suspend him, forcing him to tender a written apology. 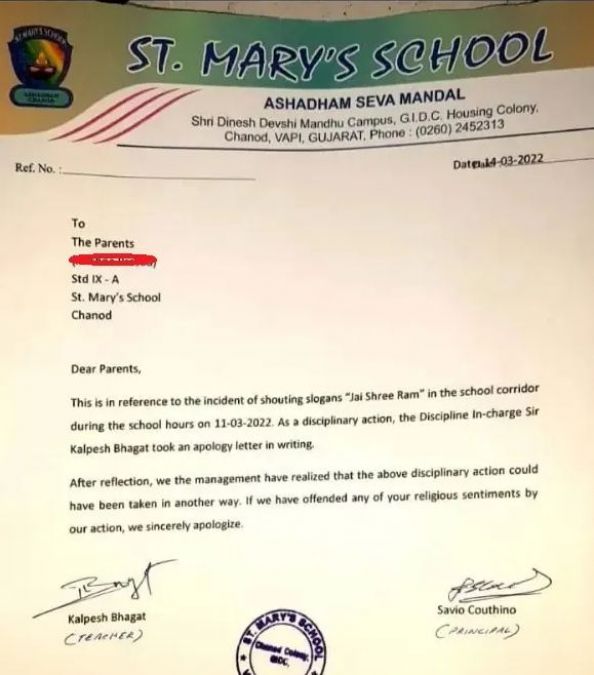 However, two days later the school withdrew the sentence and also apologised for hurting religious sentiments. In a statement, the school said, "In the case of the incident of raising 'Jai Shri Ram' slogans on 11.03.2022 in the school premises, discipline in-charge Sir Kalpesh Bhagat had taken an apology letter in writing.'' Upset with the administration of St Mary's School, the parents of the two minor children approached Narendra Payak, vice-president of the Vapi unit of the Vishwa Hindu Parishad (VHP). Vhp and Bajrang Dal members reached the convent school and protested against the school management. Following this, St. Mary's principal Savio Cathino and discipline head Kalpesh Bhagat apologised to the parents of the two Hindu children.

The school said in a statement, "After much deliberation, we (management) have realised that the above disciplinary action could have been taken in some other way as well. If we have hurt anyone's religious sentiments by our actions, we apologise with an open heart.'' VHP leader Sushil Yadav said Christian missionary schools often harass Hindu students for tying religious threats in their hands.