'Indian Idol 12' is having a day-to-day explosion. Randhir Kapoor will now be seen on the show this weekend. In fact, many promos of the show have surfaced so far. Tell you that this time the top 6 contestants in the show will sing hit songs from Randhir's films. Meanwhile, Randhir Kapoor will share old memories and will also be given a special gift from his grandson Taimur Ali Khan. Yes, in fact, a promo has come out.

In it, Randhir Kapoor to host Aditya Narayan says someone has sent him a special gift. That's when a picture appears on the screen. In it, Taimur Ali Khan is holding a greeting card on which he himself drawing and writing, 'I love you, Nana, be safe.' Randhir Kapoor is happy to see this special gift and this gift touches his heart. Then he thanks the entire team. Randhir Kapoor is seen saying, 'Thank you very much for relinquishing me, I will go straight from here to meet him. Just as every person likes interest more than really, I like my grandchildren more than Kareena and Karisma.'

Meanwhile, Randhir Kapoor, while sharing many memories, says that 'Raj Kapoor used to talk the most among all of us. He had a lot to say. There were many knowledgeable people too. Knew about films, about the world.' Let us tell you that the grand finale of 'Indian Idol 12' will be held on August 15. During this, there will be a contest between six contestants and this list includes Pawandeep Rajan, Arunita Kanjilal, Nihal Tauro, Shanmukhpriya, Mohammad Danish, and Sayli Kamble. 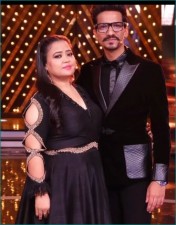