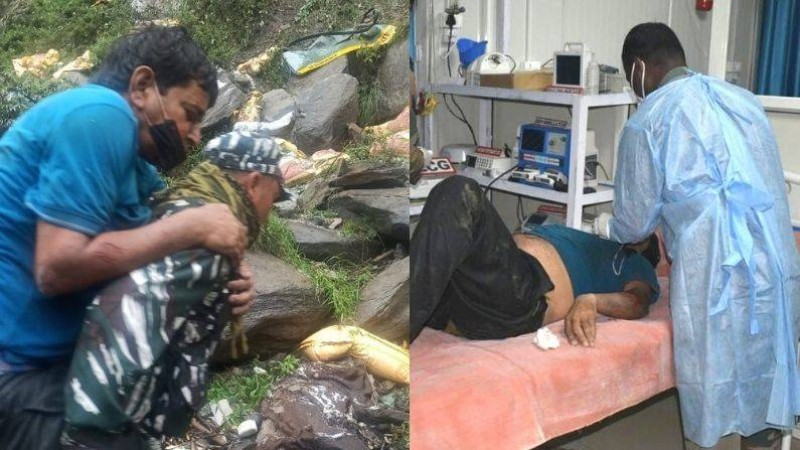 Jammu: A CRPF soldier saved the life of a seriously injured person who fell into a 50 m deep gorge near Jammu-Srinagar National Highway. The soldier loaded the man on his back and pulled him out of the ditch safely. His adventure has been praised by the army. The Army's White Night Corps in Jammu also shared a photo of the jawan on social media, with the jawan lying on his back.

CRPF constable Virendra Singh rescued Naresh Kumar #Kathua , carrying him on his back from Bichleri river after the victim's vehicle fell into a gorge near #wagan on #NH44 and helped him get timely first aid by Army Doctor thus saving a precious life .@adgpi@NorthernComd_IA pic.twitter.com/CjtD8Y98h3

Naresh Kumar, a resident of Kathua district, was on his way to Srinagar from Jammu. Due to this, his vehicle fell into a ditch near Banihal in Ramban district of Jammu and Kashmir due to poor balance on the road. Central Reserve Police Force spokesperson Shivnandan Singh said that a team of F-187 battalion rushed to the spot and launched a rescue operation.

Naresh Kumar's vehicle from Kathua had fallen into a ditch near Vagan on NH-44, White Night Corps said in a tweet. CRPF constable Virendra Singh loaded him on his back and pulled him out of the Bichheri river. Kumar's life was saved due to the help of the soldier in time. The person was treated by an Army doctor. People have been praising the CRPF and the Army on social media for saving the life of the victim and hundreds of people have retweeted the tweet.

Free corona vaccine for all people of the country, petition filed in Supreme Court

Free corona vaccine for all people of the country, petition filed in Supreme Court