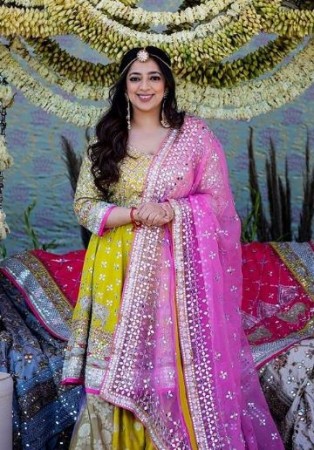 Nidhi Dutta, daughter of producer-director JP Dutta, who made Bollywood's superhit films 'Border' 'Umrao Jaan' and 'LOC Kargil', is going to tie the knot today i.e. March 7. She will make seven rounds with director Binoy Gandhi. She will get married in the traditional way in the Rajasthani style. The event will be held at the Rambagh Palace in Jaipur popularly known as Pink Sinti. The celebration started on Saturday itself to make the celebrations grand. Nidhi's Mehendi and sangeet ceremony took place on Saturday where many famous stars of the film industry attended.

They include names like Sunil Shetty, Arjun Rampal, and girlfriend Gabriella, Anu Malik, Sonu Nigam, Lisa Mishra. JP Dutta is a well-known Bollywood famous name. In such a situation, the guest list on the occasion of their daughter's wedding is also very long. First film writer and lyricist Javed Akhtar reached Jaipur. After this, actress Raveena Tandon and some other singers and staff also reached Jaipur by flight.

Also, Aditya Rai Kapoor and Arjun Kapoor, Sunny Deol, and Abhishek Bachchan are also expected to arrive today to attend the wedding program. Nidhi Dutta's wedding program is a glimpse of traditional folk culture. Rajasthani items have been included in the food and decorations there. The stars arrived at the hotel to attend the program and were welcomed with royal dance by wearing Rajasthani dance and Safa Tilak.