Kareena Kapoor is a great actor and she has won everyone's heart with her acting. According to the information received, she is currently doing Sujoy Ghosh's film. Yes and Netflix original this film is based on the Japanese novel 'The Distinction of Suspect X'. It was announced a few days ago. Apart from Kareena, the film also stars Vijay Varma and Jaideep Ahlawat in the lead roles. Yes and now Vijay Varma has shared a funny video of Behind the Scene in which he speaks the dialogue of the famous 'Pu' from the film 'Kabhi Khushi Kabhie Gham'.

You can see that after Vijay Varma's dialogue, Kareena Kapoor gives funny reactions as soon as she looks at the camera and there are a lot of reactions from fans on the video. In fact, in this video, Vijay Varma first looks at the camera and says, 'Who is it who has not seen me by turning around again, who is she?' After this, the camera turns to Kareena where she makes a funny face. The video reads, "You're not ready for it. ‘

You can see this video was captioned by Vijay Varma, "The only thing I wanted to play with Kareena Kapoor is only and amazing poo. From Behind the Scenes of The Devotation of Suspect X. By the way, talking about Vijay Varma's upcoming film, he will be seen in 'Darlings'. Yes, and there is Alia Bhatt in this film. Talking about Kareena Kapoor's work, she is going to be seen in 'Laal Singh Chaddha' which will release on August 11 this year.

Shamita Shetty was spotted with her loving boyfriend 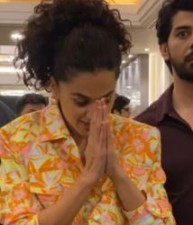