Katrina Kaif is a great actor and has won everyone's heart with her work. The actor also makes everyone go berserk with her looks. Now, after a month and a half of marriage, Adakara reached maldives and is seen laughing there. You can see their laughter is amazing. Well the biggest reason for her laughter is that she has reached her favourite place. You can see by sharing your picture and in the caption he described Maldives as his happy place. Katrina Kaif has gone alone on this trip.

Yes, Vicky is not an actor with Kaushal on this trip as Vicky is busy shooting for his film. Katrina is enjoying herself. You can see these pictures look very cute and beautiful. She is seen posing for candid photos in different ways on the beach. Tell all of you that the actress is going to be busy shooting after her wedding after a few days. She is actually working with Salman Khan in 'Tiger 3'. The shooting of the film has already started and she will also join the team soon.

She will also be seen soon in 'Bhoot Police' along with Siddhant Chaturvedi and Ishaan Khatter. She is also working with Priyanka and Alia in Farhan Akhtar directorial 'Ji Le Zara'. Apart from all these films, she will also be seen in Merry Christmas. The film will release on Christmas next year. 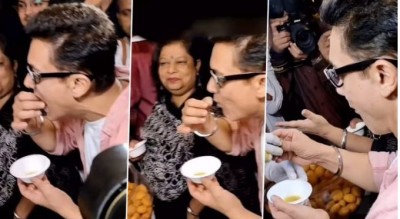