Yes You had read correctly but before you guys think let me clear that Akshay is superhero but without supernatural powers. As the film nears its release date, the makers of the upcoming film ‘PadMan‘ are promoting the movie actively. Recently, Bollywood actor Akshay Kumar shared a new poster of ‘PadMan‘, where Akki is seen donning a formal look and is holding a sanitary napkin in his hand and is standing against the backdrop of New York City and it looks like he is presenting something at a conference. The poster is innovation and sends a strong message. The poster also has a tagline which reads, “Superhero hai yeh pagla!” 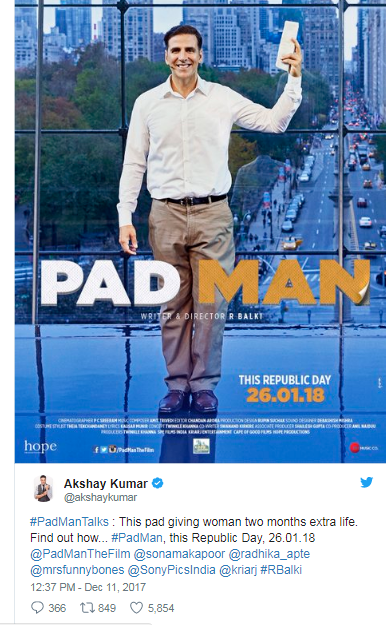 The film is based on the real-life story of Arunachalam Muruganantham, the man whose initiative was to invent low-cost sanitary pad making machines in rural India to help not only his wife but other women in his village to lead a hygienic life. ‘PadMan’ is Twinkle Khanna’s first film as a producer under the banner of Mrs Funnybones productions.The movie also stars Radhika Apte and Sonam Kapoor in key roles. Akshay Kumar is now at the peak of his popularity and so is his upcoming film ‘PadMan’. The R Balki directorial, which deals with a unique concept of promoting female hygiene in rural areas is gaining prominence and the actor has been further piquing everyone’s curiosity with new posters of the film. Here's another to add to that list. Also starring Sonam Kapoor and Radhika Apte, ‘PadMan’ is all set to release on January 26th, 2018.