'Modi-Yogi will go away, then who will save you!' No case on Owaisi's toxic statement... Lucknow: Uttarakhand Police has registered an FIR against Jitendra Narayan Tyagi (formerly Wasim Rizvi) following a viral video of his statement during Haridwar's Dharma Sansad. This Parliament was organized by Mahamandaleshwar Yati Narasimhanandsaraswati of Juna Akhara from 17th to 19th December. The action is said to have been taken due to the outrage of left and radical groups who were outraged by the video.

In several places including social media, the groups have claimed that Jitendra Narayan Tyagi has spoken about the massacre of Muslims in the video. Uttarakhand Police has also termed Jitendra Narayan's statements as controversial. According to Uttarakhand Police DGP IPS Ashok Kumar, 'The police had received a complaint. Based on this complaint, a case has been registered under Section 153A.' 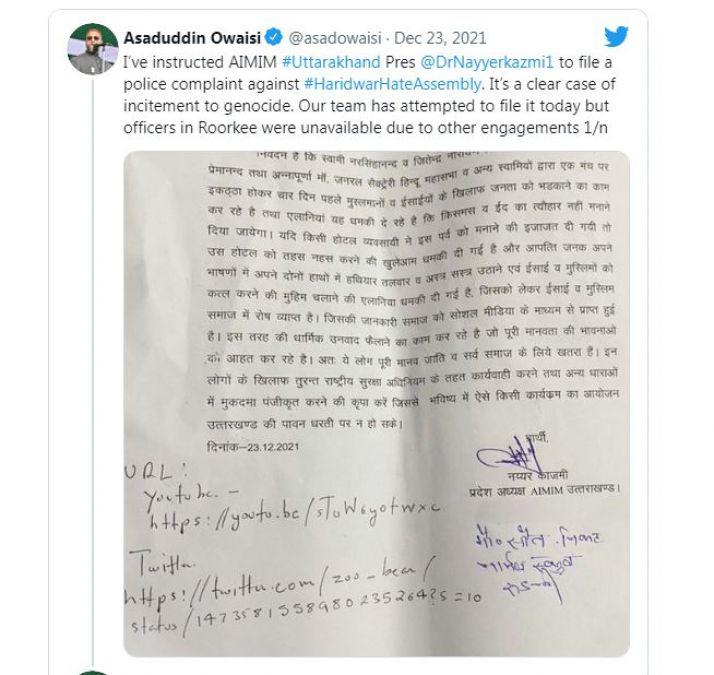 Talking to reporters after the FIR, Uttarakhand government spokesperson Subodh Uniyal said, whatever happened in the Dharma Sansad of Haridwar was wrong. Police have been directed to take necessary legal action against all the accused in the case. On the other hand, AIMIM Uttarakhand State President Nayyar Kazmi has also lodged a complaint in the matter. Sharing the complaint on social media, Asaduddin Owaisi wrote that his party will agitate at the state level if strict action is not taken against those involved in the programme.

A video of Asaduddin demanding strict action against those in the Parliament of Religions is also going viral on social media. Owaisi is seen making open threats to Hindus and police in the video. The Left and radical Hindus are reportedly adapting to the video of the Parliament of Religions in a bid to defend Owaisi's video. In the viral video, Owaisi says, "I want to tell the policemen to remember that neither Yogi nor Modi will always be a CM or PM. We Muslims are silent seeing times, but keep in mind that we are not going to forget anything. We will remember your injustice. Allah will destroy you with his own strength. Inshallah, we will remember and time will change. Who will come to save you when Yogi goes to his monastery and Modi to the Himalayas? Remember, we are not going to forget.''

Asaduddin Owaisi's controversial statement is said to have been made at a meeting in Kanpur on December 12. No FIR has been registered on the statement so far. The AIMIM Chief himself is believed to be playing the victim card as a complainant to divert attention from his same statement.