There was a huge outcry across the country regarding Corona, meanwhile Corona has wreaked havoc in the entertainment world as well. After the recovery of famous actresses Kareena Kapoor and Amrita Arora, now Nora Fatehi has got corona. Nora's spokesperson has confirmed this and told that Nora is currently doing Quarantine and is under the supervision of doctors. Hearing this news, Nora's fans have started worrying about her and everyone is wishing her well.

On the same day, Bollywood actor Arjun Kapoor and his sister Anshula have been found to be Corona positive. Yes, after the reports of both of them came positive, both have become quarantine and they have appealed to the people who came in contact with them to get tested. Let us tell you that yesterday was Anshula's birthday, so this news was surprising. Let us tell you that in the past, Arjun Kapoor went to celebrate Christmas party at his girlfriend Malaika Arora's house. 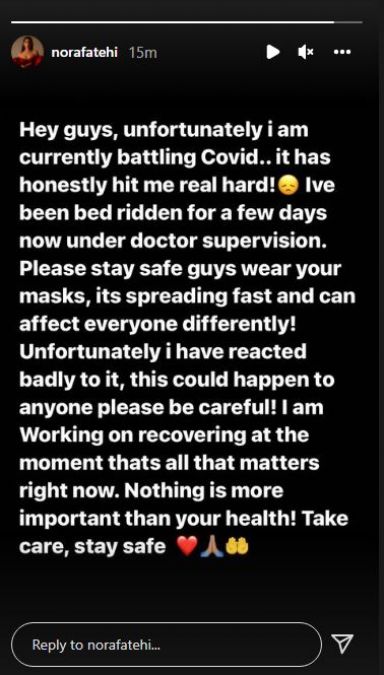 At the same time, Malaika's sister Amrita Arora and Kareena Kapoor were also involved in this party. You must be aware that both the celebs became corona negative just a few days before Christmas. In such a situation, there can be a possibility that Arjun has been infected in the party. On the other hand, Riya Kapoor and Karan Boolani have also come under the grip of Corona. In fact, when the news of Kareena and Amrita getting corona infected came, then the name of Riya Kapoor was also in the news.

This actress of 'Hum' movie got hit by Corona

Sharvari Wagh reveals about the relationship with Sunny Kausha