Bollywood actress Preity Zinta is enjoying Motherhul these days. Preeti is living every moment of her life with her two children Jia and Jai Sang. Preeti has now shared an interesting picture with both her children on her Insta Story. Although the picture does not show the faces of the children, the picture is still winning the hearts of fans with Preeti's children.

In Preeti's picture, you can see both the actress' children Jai and Jia rapping in blue and pink clothes and lying on the bed. Abhishek Bachchan's film Bob Biswas is playing in front of them on television. Sharing this special picture, Preeti wrote- First movie with children. OMG Bachchan, you have made our Saturday. What a killer performance and what a great film. Preeti has also put up a lot of thumbs-up emojis with the caption. 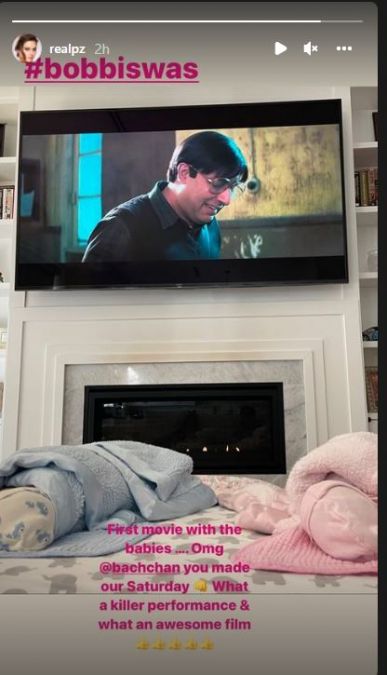 Preity Zinta shared the good news of becoming a mother with fans last month. After becoming a mother, Preeti's life has been blessed with happiness. Preeti had also recently shown the world the first glimpse of her child on her social media handle. The actress shared the back look of the baby. If you talk about Preeti's work front, she made her acting debut in 1998 by working in the film Dil Se. She played a successful inning in films. She has not appeared in any film since 2018.

'I am a human being, I feel bad', says Pankaj Tripathi