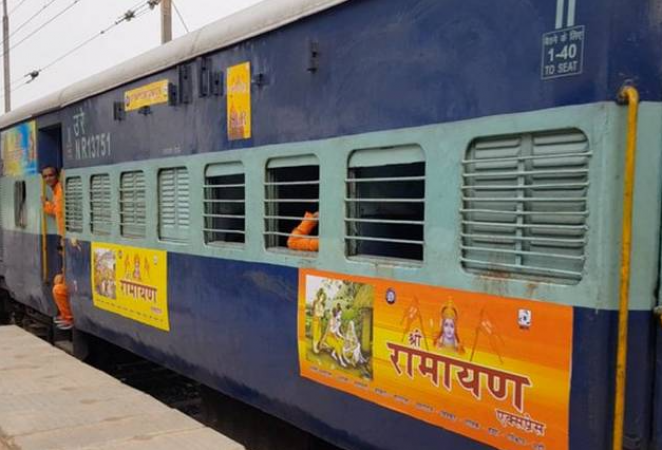 Ujjain: On a Ramayana Express train, a ruckus arose over a waiter's saffron dress. The Ujjain saints and saints have protested to the waiter's dress and have vowed to halt the train on December 12 in Delhi. The IRCTC has modified the uniforms of the train's waiters as a result of this. 'It is claimed that the waiters' outfit has been fully changed to professional waiter attire,' IRCTC tweeted.

The sadhus and saints of Ujjain had objected to the waiter's saffron clothing aboard the Ramayana Express train on Monday morning, calling it an insult to Hinduism and threatened not to allow the train to leave Delhi on December 12 until the dress was replaced. Former Ujjain General Secretary Awadheshpuri stated, "We wrote to the Union Railway Minister two days ago voicing our objection over the waiter serving beverages and meals aboard the Ramayana Express train in saffron clothing." It is insensitive to Hinduism and its saints to serve beverages and meals to passengers aboard this train by waiters dressed as saints in saffron robes with rudraksha garlands.

He says that unless the waiter's saffron gown is changed, the sadhus and saints would not let the train to depart Delhi's Safdarjung railway station till December 12. Trains will be parked on the rails. This is required in order to safeguard Hinduism. In Ujjain, we have taken a strong stance on this topic.

It is learnt that the country's first Ramayana circuit train left Safdarjung railway station on November 7 on a 17-day journey with pilgrims. The train runs at 15 places associated with the life of Lord Ram. The train will cover a distance of more than 7,500 km and take the pilgrims to places like Ayodhya, Prayag, Nandigram, Janakpur, Chitrakoot, Sitamarhi, Nashik, Hampi and Rameswaram.

Objecting to saffron attire of waiters serving refreshments and food on board the Ramayan Express, seers from Ujjain in Madhya Pradesh claim it is insulting towards Hinduism, threaten to stop the train in Delhi on December 12 if the dress code is not withdrawn

Seers from MP had earlier objected to saffron attire of waiters serving refreshments and food on board the Ramayan Express.

Thankfully common sense prevailed.. wonder who comes up with these sort of weird ideas. pic.twitter.com/RdXMX64QUJ