Shahnaz Gill seen smiling with brother, this picture in the discussion Punjabi actress Shehnaaz Gill  has been making headlines these days. She had been away from social sites for a long time but shortly ago Shahnaz was seen in an orphanage whose photos and videos went viral on social media. Now another photo of Adakara amidst all this is going viral on social media. She is seen with her brother Shahbaz Badesha in this photo. You can see Shehnaaz smiling in this photo.

Though Shahnaz Gill has been in shock since the death of boyfriend Siddharth Shukla for a long time, she is now smiling and her photo has brought relief to her fans. Tell all of you that pictures of Shahnaz Gill with her brother Shahbaz are going viral on social media. You can see shahnaz gill in yellow sweater in this picture and both the siblings are standing in the light sun. Shahbaz is seen wearing black sunglasses and Shahnaz Gill in glasses in this picture.

You can see shahnaz gill and shahbaz hugging and posing in front of the camera in this picture. Now, when it comes to profession front, Shahnaz Gill is currently seen with Punjabi singer and actor Diljit Dosanjh in the film 'Hausla Rakh' which is the best film. There are not many updates about their work ahead. 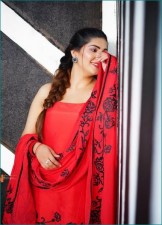