Kartik shares a 'little creepy' incident when a fan claimed that they were a married couple. Kartik revealed how a girl brought a framed photograph of them and stood with it outside his home and claimed that she is married to the actor. Kartik said, “There was an instance when a girl framed a photograph that had her and me as a married couple. She brought it and stood below my house holding it and claimed that we both are married. I got to know about it much later. That was a little creepy. I went like, ‘Kya ho kya raha hai (what is happening) (laughs)?’”

Kartik further speaking about his film Freddy said, “I wasn’t concerned about how the audience would react to my role. They’re very smart. We had released a mini clip from the film which was about 45 seconds to one minute long, but they picked up small things from it and really enjoyed them. I was glad that they took notice of those things because I also look at films like an audience. I too like being shocked and thrilled. I looked at it as a great addition to my filmography."

Kartik is all set for his film Freddy. It  is the first of Kartik’s upcoming releases. The film also stars Alaya F. He will then be seen in Shehzada opposite Kriti Sanon. The Rohit Dhawan film will release in February next year and is the official Hindi remake of Allu Arjun’s Telugu blockbuster Ala Vaikunthapurramuloo. Kartik also has Satya Prem Ki Katha opposite Kiara Advani in the pipeline. He has also been cast in Aashiqui 3. 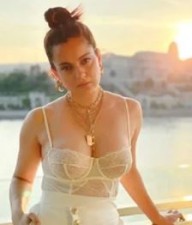