After releasing two posters of the movie Padman and several looks from the film, the 50-year-old has now sought the attention of the fans with a motion poster.In the clip, we can hear co-star Sonam Kapoor teaching Akshay Kumar the spelling of 'PadMan'.

The Khiladi of Bollywood shared the motion poster on his official Twitter handle and captioned it as, "P-A-D + M-A-N = PAD MAN. It's that simple :) Coming to you, this Republic Day, 26.01.18@PadManTheFilm @sonamakapoor @radhika_apte @mrsfunnybones @SonyPicsIndia @kriarj #RBalki #PadMan."The Khiladi of Bollywood was last seen fighting against open defecation in 'Toilet: Ek Prem Katha' and now, he is all set to lend his voice to another social cause.Looking at this motion poster, the curiosity level certainly piques. Sonam Kapoor is heard of teaching the spelling of Padman and how to pronounce the name of the film in the audio clip 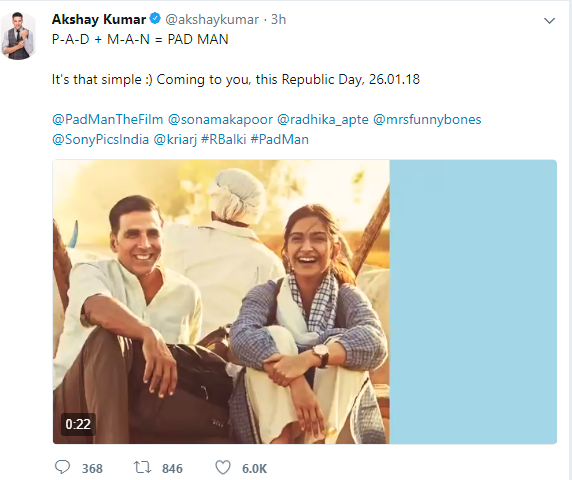 The actor Akshay Kumar will play the role of Arunachalam Muruganantham in the movie Padman, who invented low-cost sanitary pads and fought for menstrual hygiene.Helmed by R. Balki, 'PadMan' also stars Radhika Apte in a pivotal role.The flick is slated to release on the 26 January on the occasion of Republic Day and will be going to clash with movie Sidharth Malhotra-Manoj Bajpayee starrer 'Aiyaary' at the box office.