the most awaited 'padman' Trailer is out now Bollywood Khiladi Akshay Kumar aired a new poster of his upcoming film ‘Padman’. The film stars Akshay Kumar and his on-screen wife Radhika Apte. Both are acting as a simple village look and smile for the poster.The fans of Akshay Kumar wait is over for the Padman trailer launch and here Akshay has posted the trailer from the twiyyer handel.

Akshay Kumar subtitle the poster stating,Presenting the much awaited #PadManTrailer, this one's for the mad ones, the ones who are crazy enough to change the world 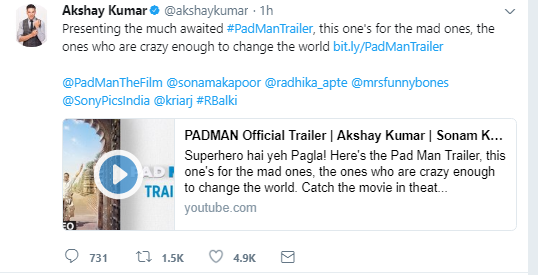 Film ‘Padman’ is written and directed by R. Balki (Cheeni Kum, Paa), Akshay Kumar portrays the real-life social entrepreneur Arunachalam Muruganantham, the inventor who risked everything, including his own reputation, to introduce low-cost and easily accessible sanitary napkins to poor women in India and around the world.Previous in a media interaction with a leading daily, when Akshay Kumar was asked about starring in a movie which delves into the topic of menstruation, “If you change nothing, nothing will change. It’s not about being bold, but about breaking taboos that hold us back. I have lived with ladies all my life, yet I have learnt more about the topic while making this film than ever before. I do not mind who I offend or whose stomach I turn by being bold, this is not the Stone Age; menstruating is natural.”The movie produced actor Akshay Kumar wife Twinkle Khanna’s Mrs Funnybones Productions also stars Sonam Kapoor. The film is slated to release on January 26, 2018.